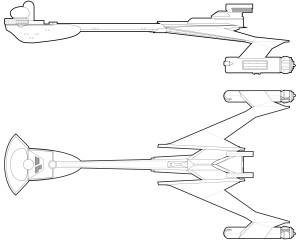 I created the L-3 class to help bolster some of the older era Klingon ships. The original design is from an older blog where the gentleman built several “mini’s” – including two rather well done Klingon designs. One he planned on as a Frigate (which I’ve dubbed the L-3) the other was a scout. (Haven’t done that one yet.) Fortunately, the mini’s in question have rather decent photos…

My drawings are crude – to say the least. But I think their adequate to convey what the original design was intended to look like. One of the main reasons I wanted to create it was that of course – there are VERY few ships for the TOS era Klingons. Compared to the numerous Federation ships – the Klingons (and Romulans for that matter) fall FAR behind. When I started working on a Whiteflame like supplement for the Organian conflict, i quickly discovered that the Klingons were seriously outmatched. Even their 3 to 1 superiority was no real match for the many new Federation designs we have. To top it off – there isn’t nearly the interest in creating new – or at least original looking Klingon designs for the era.

Now there are a few other designs out there – namely Jackill’s TOS era ships. I’ve been desperately trying to contact him, especially since he live just up the road from me – but alas I’ve had no luck. Now THOSE ships use phasers as well as disruptors, which I’d need to change up. I would just purchase a set of the blueprints – but I’m not sure if their still for sale. But – there are a few light destroyers, scouts and cruisers in the set that MIGHT just fit the bill. Hopefully I’ll be able to find out if they’re still being printed and if I can buy a set.

Meanwhile – I have NO idea who actually created these mini’s as I can’t find a name or contact info on the web site. So if you happen to know who did them – let me know so I can credit them appropriately. Anyway – enjoy the new L-3…let me know what you think!