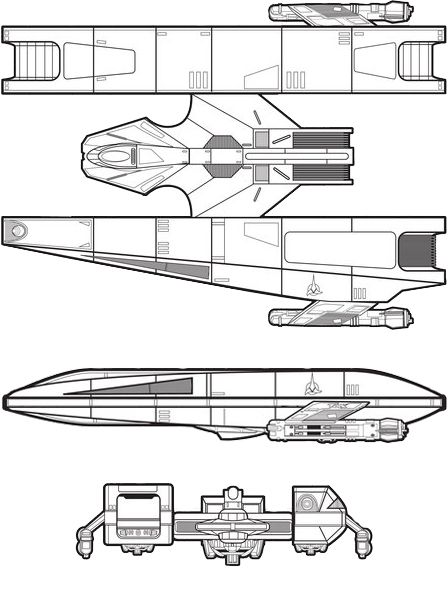 NOTES:
The Conveyor of Retaliation was originally fielded by the Klingons as the IKS Hateender and operated along both the Klingon-Romulan boarder and the Triangle boarder. The Hateender was known to have participated in no less than 11 front-line combat operations before finally being captured in the Klingon’s invasion attempt of K’K 66. The ship was immediately transported to Southern Defense Complex and work was begun on converting the vessel.

As was standard with most captured Klingon ships, the internal components were largely removed, including the hated hypothermia capsules and live food storage areas. This immediately reduced the troop compliment to two companies of Romulan troops. However, the rearranged interior was far more comfortable and functional than the traditional cramped spaces utilized by the Klingons. The Type 1 retained the Klingon warp drive but replaced the primary computer, impulse drive, weapons and shield system. Unlike the traditional T-1, the Conveyor of Retaliation replaced the forward beam weapons with a set of RB-11’s, giving the troop transport significant bite while supporting it’s troops. At the time of re-launch, the Type 1 also fielded the most powerful Romulan torpedo in the inventory, the RP-3.

The Conveyor of Retaliation was commissioned in 2274 and sent directly to the Triangle. While the truce between the Klingons and Romulans was continuing to deteriorate, military leaders realized that the Retaliation could better be used in deterring the Klingon’s continued aggression. With it’s heavier firepower and cloaking device, the Retaliation was able to successfully interdict several Klingon landings on neutral worlds.

In early 2284, the Retaliation was recalled to upgrade the primary torpedoes and replace several sensor systems. Planners on both sides of the Klingon-Romulan boarder realized that the alliance would soon deteriorate into open warfare and that more powerful ships would be needed.

The Retaliation was damaged in 2336 during the defense of a Romulan boarder post. Although still viable, the decision was made to upgrade a number of sub-systems to more modern equipment. The Tal-Shiar took over sponsorship of the Conveyor of Retaliation and secretly funded the replacement of the primary torpedo system and shield system. The Type 3 would remain in service until 2354, when she was slated for upgrade to her primary warp drive. However, installation of the Romulan quantum-singularity power-plant proved problematic at best. By the end of 2354, the decision to retain the Klingon dilithium power-plant was approved and the Retaliation saw a final upgrade to her weapons and shields.

The Retaliation saw little combat against the Klingons, but would serve year later during the Dominion War. Although successfully supporting Federation troops on several occasions, the Retaliation was badly damaged in late 2373 and was scrapped following the war.