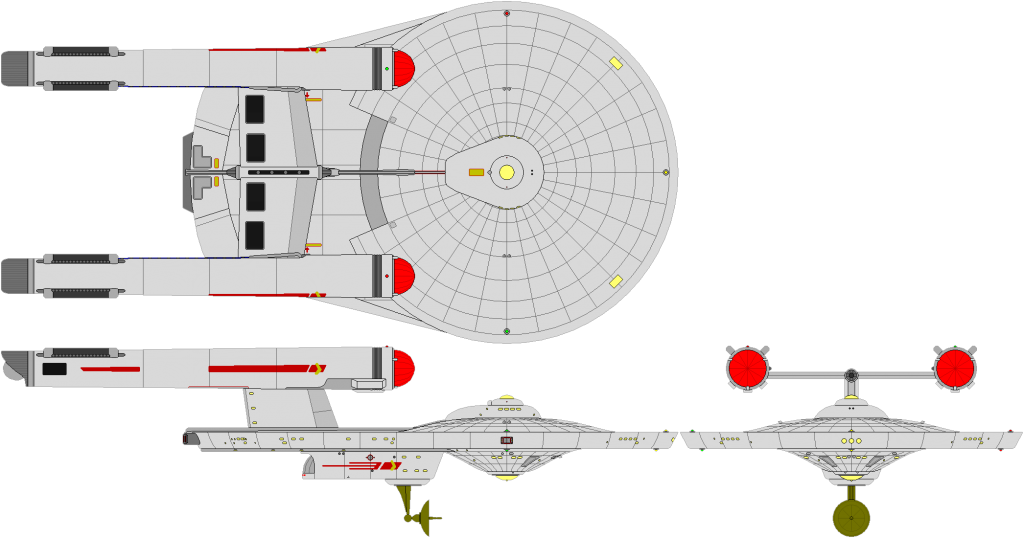 NOTES:
First fielded in 2256, the Normandy Beach class of light cruiser was designed to provide all of the capabilities of the venerable Constitution class in a smaller and less expensive package. Like so many other cruisers of the period, the Normandy Beach was forced to specialize to ensure funding. The internal layout provided two main research centers, one forward and on aft. Both centers could be easily reconfigured for space science, planetary research or even cultural observation. This ensured that the Normandy Beach had a service life beyond the end of the Four-Year war.

However, 6 of the eventual 9 hulls were all launched shortly before the adoption of the Phaser as the Federation primary beam weapon. Fielded with a main heavy laser, a design that would eventually be the foundation for the Mega-Phaser, the Mk I was obsolete even before all 10 of the initial hulls were complete. By 2261, the last of the initial hulls was being refit for service with new weapons and an enlarged computer.

Part-way thorough the redesign, the decision was approved to use the FWD-2 power-plant. The FWD-2 provided excellent power transfer to the maneuvering thrusters, making the Mk II incredibly maneuverable. Conversion of the Mk I was set to be complete by 2263 with an additional four hulls added to the construction contract.

The Mk II served well, with most exploring the rim-ward frontiers. With it’s maneuverability, several were detailed to patrol the Klingon frontier. In 2264, the USS Normandy Beach herself was destroyed while engaging a Klingon battlecruiser. Designers pushed forward plans to further upgrade the Normandy Beach. The Mk III upgraded the shields, but had few other changes when fielded. Only the prototype was finished.

The Mk IV utilized new power transfer systems to allow for the installation of significantly more powerful weapons and a further upgrade to the shields. The Mk IV would be the last refit and served until 2281. It would serve with distinction during the Organian conflict, Of the 14 Normandy Beach cruisers built, 1 Mk I and 1 Mk IV have been scrapped, 1 Mk II was destroyed.
The Normandy Beach was built at the Alpha Centauri and Lochlar facilities.