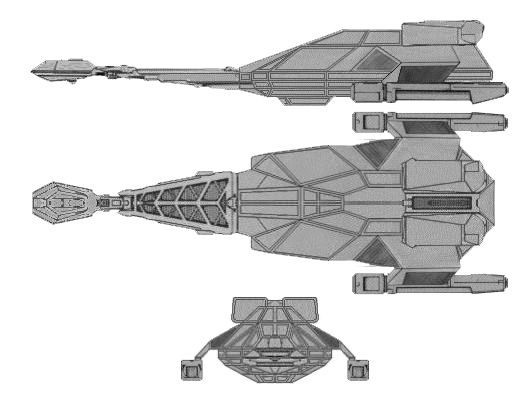 NOTES:
Captured in 2330, the Corrupting Vengeance was unsponsored and nearly scrapped before the citizens of Khazara Colony IV petitioned to relaunch the vessel. Several colony members had lost relatives aboard the ships that were attacked by the Klingon battleship Vendetta. While it had taken over a year for the Romulan Navy to track down and defeat the Vendetta’s squadron, several Klingon ships were captured during the battle. When informed of their victory, colony officials immediately requested an assessment of the Klingon hulk, and were somewhat disappointed in the resulting survey.

Yet anger was still high among those who had lost loved ones. Several significant financial endeavors had also suffered from the Vendetta’s sojourn into Romulan space. The petition was eventually ratified and funds were diverted from the colonies’ yearly supplement to refit the vessel.

The ship was rechristened Corrupting Vengeance and the refit process was begun in earnest. The impulse drive was immediately replaced, as was the main computer and most other onboard components. Designers initially wanted to leave the Klingon warp nacelles, but both had been significantly damaged during the ships capture. While the warp coils were intact, much of the internal coolant and plasma transfer system was replaced. The Klingon disruptors were replaced with the Romulan RB-13’s, which gave the vessel excellent firepower. To avoid the need to obtain Klingon photon torpedo casings, the torpedo launchers were replaced with Romulan RP-8’s.

The Type-1, launched in the last days of 2330, was immediately sent back to the Klingon boarder where is was soon engaged with enemy forces. While the Corrupting Vengeance was slightly less effective than its Klingon cousin, it was considered an excellent battlecruiser and would engage the Klingon no less than eight times before finally being recalled for a refit.

In early 2345, plans were drawn up to replace the RB-13’s with more powerful RB-15. The primary sensors and magnetic interlocks were replaced at this time, and the Corrupting Vengeance was relaunched. The ship would not see action for several years, but would eventually engage both Klingon and Orion privateers along the Romulan boarder.

In the mid-2360, the decision was made to reduce the ships primary mission, and by 2368, despite difficulties and fears of Federation expansion, the Corrupting Vengeance was placed into the Reserve Fleet. However, it would be reactivated as the threat from the Dominion grew. The Battle of the Omarion Nebula startled many in the Romulan High Command, and dozens of mothballed and reserve ships were quickly upgraded and refurbished for immediate use in the anticipated coming conflict. The torpedo system and shields were found to be easy updates to the vessel, and both were completed in mid-2371. The ship would remain on patrol along the Federation boarder until 2374 when it was rushed to the war front.