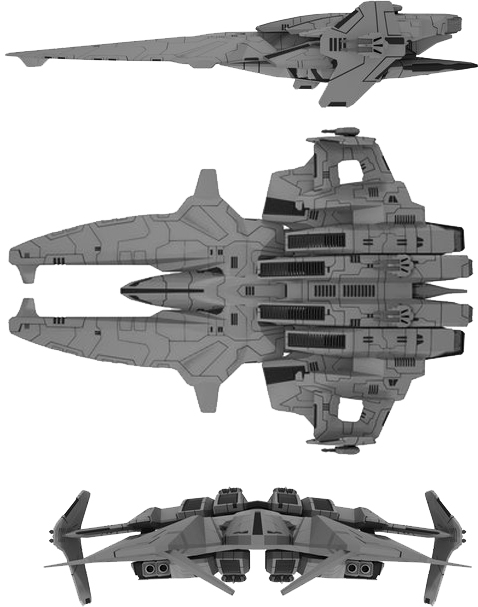 NOTES:
Another in a long list of small, fast and underwhelming vessels fielded by the Orions, the A-1 variant of the Archangelos is little better than a heavy combat shuttle. Designed by Orion Corporate Shipbuilding Ltd shortly before that company was absorbed by Orionco, The Archangelos was intended to be a slick, fast and deadly vessel capable of defending itself from larger military vessels. When first launched in 2260, the A-1 seemed to fulfill these roles well. The Archangelos’ speed and armor made it a popular choice among new ship captains. While the speed of the A-1 was profitable to merchants and pirates alike, it was the overall firepower that made the vessel a true threat. The mid-range light torpedo gave the cutter sized blockade runner sufficient power to take down a freighter’s shields and board her quickly. Unfortunately for most pirate captains, the A-1 was sleek but crowded, with no room for a dedicated boarding party. Despite it’s shortcomings, many wealthy merchants purchased the A-1 in pairs to support other heavier or larger vessels. A total of 87 were officially built by OCS before the company’s collapse in 2267.

Orionco, who purchased the remnants of OCS, immediately redesigned the interior of the Archangelos, redistributing equipment and internal volume. The A-2 went from light armed freighter to major combat cutter in less than one year. The use of the heavy Orion OD-4 disruptors gave the A-2 firepower equivalent to some cruisers and destroyers of the period. Orionco dropped the pretense of a freighter, focusing the design on a purely combat layout. The A-2 became even more popular, with both Orion and non-Orion firms purchasing the vessels. By the time

Orionco finally ceased production of the A-2, nearly 130 were built and officially sold.
The Archangelos is no longer in general production, although the plans have been copied by several other companies. A-1 and A-2 models still in use are being modified at several Orionco shipyards. Although a number of A-1 and A-2 models have since been sold to unknown individuals, records show that 11 A-1’s and 67 A-2’s are still in used throughout Orion controlled space. As with other Orion designs, several are believed to be in use by the Klingons for covert training purposes. Rumors continue to abound that several have been captured or purchased by the Romulans. Official records show that five A-1’s and 2 A-2’s have been purchased by various Naussicans interests. Three A-1’s have been purchased by an Ithenite corporation, with two more A-1’s purchased by Yridian interests. Well over 100 remain in an unknown status, although some 60 are known to be used by pirate cartels.