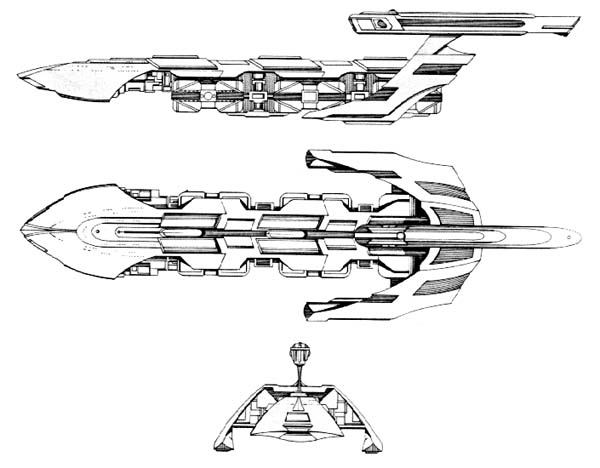 NOTES: DESIGN NOTES:
The Lotus Flower is one of those ships printed in two locations (Starship Combat Rule Book and Star Trek III Sourcebook) that appears to have been created before the 2nd Edition ship construction manual was published. As such, it is a bit difficult to reconcile the printed game stats with either on-screen or in-game material. The Lotus Flower class is used as FASA’s Kobayashi Maru that tests all potential Star Fleet ship commanders in a no-win scenario. As such – we get a really good shot of the data for the vessel.
On Screen Data
The on-screen data lists the dead-weight tonnage as 147,943 mt. At first – this seems to indicate a class IX of X ship in FASA terms…unless you look up the actual term of deadweight tonnage – wish is listed as “the sum of the weights of cargo, fuel, fresh water, ballast water, provisions, passengers, and crew.” Since the cargo capacity is listed right under the DWT as 97,000 mt – an “empty” ship would be ~50,000 mt. NOW we have a class V ship – not a class X. A big difference from what FASA originally created.
In Game Data
The Starship Combat Rule Book lists it’s version as the Mk XII, while the Star Trek III Sourcebook listed it as the Mk X. After designing 10 versions of (essentially) the same ships – I stopped and decided that would be it. Luckily for us – the FWE-2 warp system does work on a class V ship (at 3/1 MPR) and can be used on a class XI ship (at 4/1 MPR). This means that in (very VERY) rough terms, you could have a ship that can transport 120,000 mt of cargo – more than enough for the 97,000 mt listed on screen. An so we have our version of the Lotus Flower.