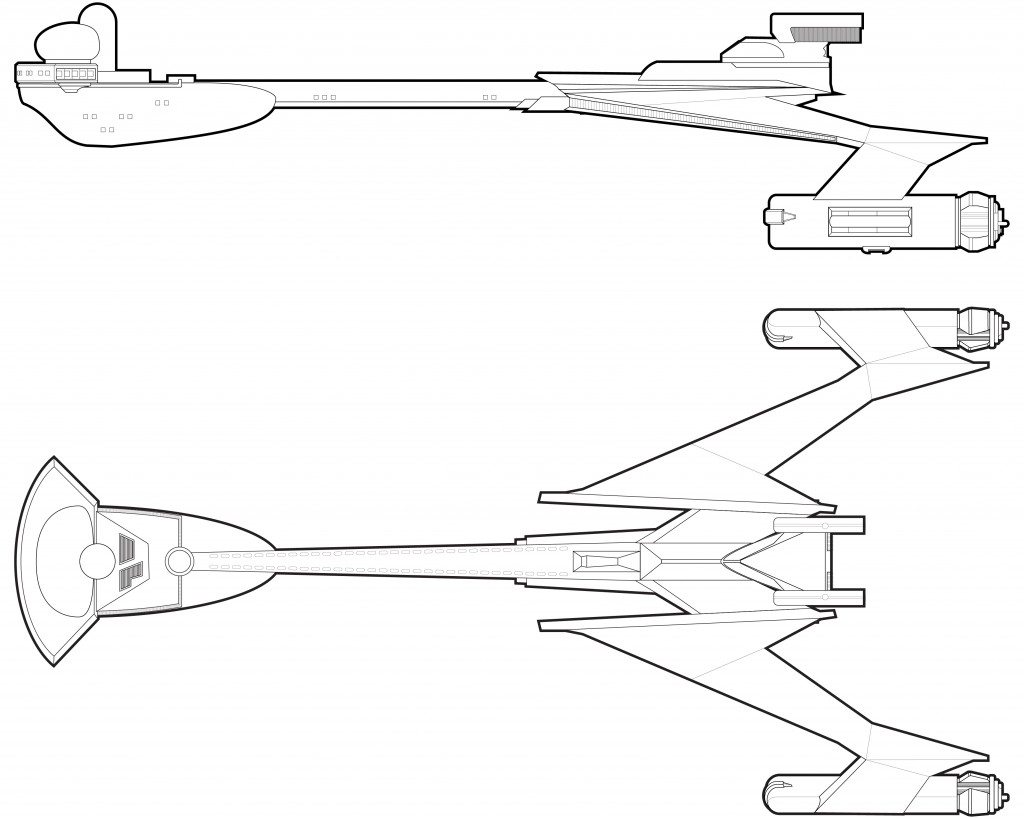 NOTES:
The L-3 frigate was one of the most basic designs fielded by the empire for nearly 100 years. First commissioned in 2244, the L-3 was simple in design, layout and function. Unlike many designs of the era, the L-3 was not built to fight the Federation, but instead to combat the Romulans, who’s growing aggression along the boarder was drawing needed resources from the impending thrust against the Federation.

The initial design called for a full Battalion of troops, but was soon revised downward. Although provisions were made for a Medium Batallion to be billeted aboard, the final decision was made to house a Light Battalion without the use of hypothermia capsules. Internally, the wings of the L-3 housed support equipment, training facilities and secondary systems for use by the on-board troops. However, the actual barracks were considered very cramped and friction between naval and Marine personnel was a constant on-board the class.

The L-3a was considered a capable combat platform when launched in 2244. The ‘A’ model mounted the venerable KWC-1 warp drive which was proven in battle again and again. Because of the large internal crew requirements, the ‘A’ model was equipped with the KIB-2 which was small but adequate for much of the lighter duties of the L-3. But where the design flourished was in it’s six KD-4 medium disruptore. Mounted on the boom, engine nacelles and aft quarter, the KD-4’s gave the L-3 the ability to concentrate a powerful forward strike when needed. During it’s early deployment. Although capable, the L-3 was not overly powerful. Only 76 ‘A’ models were commissioned, most of which served along the Romulan boarder. Less than two dozen saw use along the Federation boarder. Of the 76 built, 4 are listed as missing, 17 have been destroyed, 11 have been scrapped, 4 have been captures (1 by Star Fleet, 2 by the Romulans, 1 by Massarites), 10 have been sold (5 to the BCP, 3 to the Romulans, 1 to the AMFO and 1 to the Ferengi), 10 are in service to ranking families in the empire and 20 were converted to ‘B’ models.

The ‘B’ model saw a marked increase in the accuracy and efficiency of the L-3’s main disruptors. An enlarged computer and more powerful shield system also gave the ‘B’ model greater firepower and survivability. However, the ‘B’ model saw little use against the Federation, even during the Four-Years war. The majority of L-3s served along the Romulan boarder to discourage extensive acts of aggression while the war was prosecuted. Neraly 40 saw patrols against the Kinshya, where they were forced to operate in groups of four to ensure survivability. None the less, the ‘B’ model was produced in larger numbers than the ‘A’ variant. 118 new hulls were fielded along with 20 ‘A’ models that were converted. 2 are listed as mission, 23 have been destroyed, 9 have been scrapped, 5 have been captured (2 by Star Fleet and 3 by the Romulans), 20 have been sold (15 to the Romlans and 5 to OFMS forces in the Triangle), 20 have been traded to the Romulans, 15 are in reserve fleets, 5 have been sold to ranking families in the empire and 39 were converted to ‘C’ models.

The ‘C’ model saw the introduction of a larger impulse drive and more efficient shield system, as well as the installation of the third generation version of the KP-1 torpedo. This gave the L-3 serious sting when needed and allowed the ships to operate alone rather than in small squadrons. The L-3c saw limited action against the Federation during the three days of the Organian conflict, but saw extensive action against the Kinshaya. About a dozen L-3c also saw action against the Talarians in the early part of the Klingons expansion efforts towards the (as of yet unknown to the Klingons) Cardassian boarder. A total of 117 ‘C’ models were eventually fielded, including 78 new builds and 39 refits. 1 is listed as missing, 7 have been destroyed, 4 have been scrapped, 3 have been captured (1 by Star Fleet, 1 by the Romulans and 1 by indeterminate forces in the Triangle), 8 have been sold to the Orions, 10 were traded to the Romulans and 20 to a Sulliban cabal loyal to the Empire. 50 are in reserve fleets and 10 are in the service of ranking families in the empire. Only 4 ‘C’ were converted to ‘D’ models.

The ‘D model had only 5 hulls produced, including the four converted ‘C’ models. In an attempt to mount an aft firing torpedo, the ‘D’ model removed two disruptors, nearly all of the Marine training facilities and several other key combat systems. Although the torpedo system was mounted, space on-board the L-3 – already at a premium due to the forward torpedo – was now considered to be unacceptable. The ‘D’ never saw combat.

The ‘E’ model saw a number of improvement over earlier designs. An upgrade to the more powerful KWC-2 power-plant gave the L-3e far more power while retaining much of it’s battle reliability. KD-6 became the main weapon, giving the L-3 equal firepower to most destroyer and cruiser it encountered in the field. However, the L-3 had lost some of it’s luster, due mainly to political infighting in the upper naval echelons. Despite the backlash, the L-3e was a very capable fighting ship and proved popular along the Federation boarder, where it’s use skyrocketed. The L-3e became a capable pirate hunter, engaging Orion raiders along the Federation and Triangle boarders. Along the expansion boarder, the L-3e was used in the conflicts with the Talarians, Cardassians and eventually the Breen. Of the 111 built (and four converted) 10 have been destroyed, 7 have been scrapped, 6 have been captured (1 by Andorian forces, 1 by Cardassian forces, 3 by Romulan forces and 1 by Orion forces), 10 have been sold (5 to Naussican forces and 5 to Private Interests in the Triangle). 30 are listed in Reserve Fleets, 8 are in service to ranking families in the empire and 44 were converted to ‘G’ models.

The ‘F’ model, like the older failed ‘D’ model, attempted to mount an aft firing torpedo. While unsuccessful, design elements allowed for the introduction of the ‘G’ model in early 2290. The ‘G’ introduced a number of features, including a larger computer, cloaking device and vastly enlarged impulse drive. These introductions proved extremely popular and plans were drawn up to refit nearly 100 older L-3s to this versions. The destruction of Praxis brought the L-3 design to an abrupt halt. With the Military budget slashed to nearly nothing, production of the L-3 was halted after only 13 new hulls were built. Conversion of older ‘E’ models continued into the later 2290’s, but the L-3s design limits were well established and in 2302, the L-3 was scheduled for retirement. Pf the 57 ships fielded (including 13 new builds and 44 converted ‘E’ models) 1 was listed as missing, 3 were destroyed (including 2 in the Praxis disaster), 1 was scrapped (also after the Praxis disaster), 1 was captured by the Romulans, 11 are in reserve fleets and 10 are in service to ranking imperial families. 30 are still in use as basic training vessels despite their age. However, plans to scrap all reserve and training vessels are currently being considered.