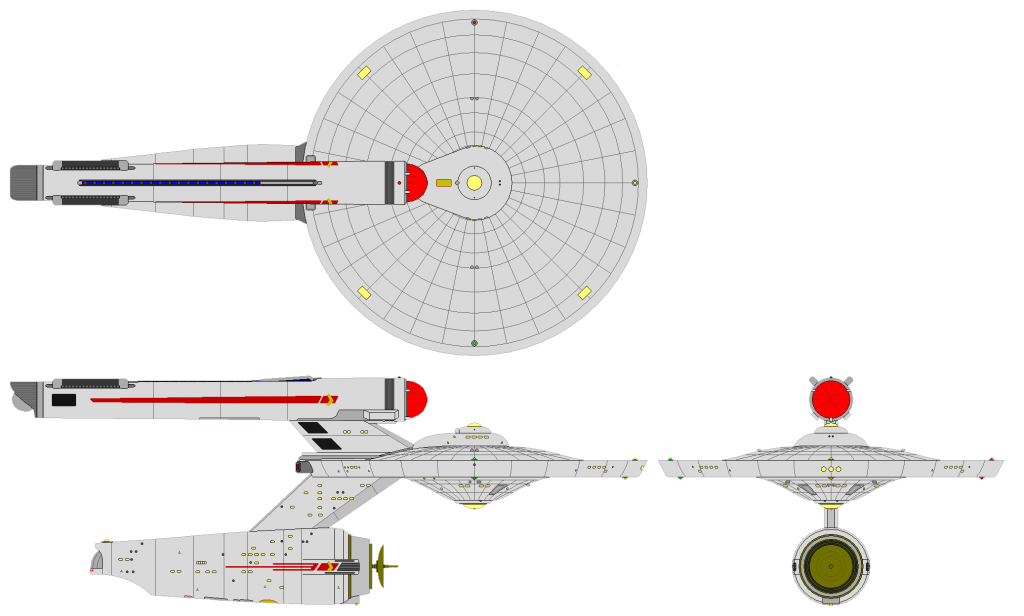 NOTES:
The basic Saipan class has proven to be more versatile and capable than most other variants of the venerable Constitution class. When proposed, it was hoped that a larger warp nacelle and power-plant could be installed. However, the decision was made to use only a single nacelle and the FWF power-plant.

The Saipan was originally intended to be sent into combat as a light attack cruiser, a designation that did not sit well with many in the Federation. However, the conclusion of the Four-Years War meant that designers were able to quickly retool the Siapan for an exploratory roll.

Like other Constitution variants, the main engineering was relocated to the primary hull, with the secondary hull being refit for more science labs, research subsystems and crew quarters. The Saipan was known for it’s large hydroponics lab, a design that the Enterprise refit would adopt 20 years later.

The Mk I was not overly maneuverable, but was sufficiently powerful to handle most of it’s deep space assignments. The overall range was extended to nearly seven years by the use of the FWF single nacelle design. The Mk I retained the Accelerator Cannon armament, but was fitted with Phasers as it’s primary weapon.

The Mk II saw the refit of the primary torpedo system to the now venerable FP-1 system. The Mk III, launched a year later saw the upgrading of the main phasers and a more powerful torpedo system installed. The Mk III’s heavier weapons did force the movement of several sensor subsystems, but in the end the vessel remained relatively unchanged. Shortly before the dry-docking of the Enterprise, the Saipan Mk IV was launched. With a more powerful computer and larger impulse drive, the Mk IV would serve until 2276 when the last Saipan was removed from service.

The Saipan would go on to serve as the basis of the Saipan II class, with nearly all of the original vessels eventually being refit to the new version. Of the 25 Saipan’s launched, 1 Mk I is listed as missing. 1 Mk I and 1 MK III have been scrapped. 1 Mk II was destroyed and 2 Mk IV currently serve as training vessels. The Saipan was built at the Vulcan shipyards.