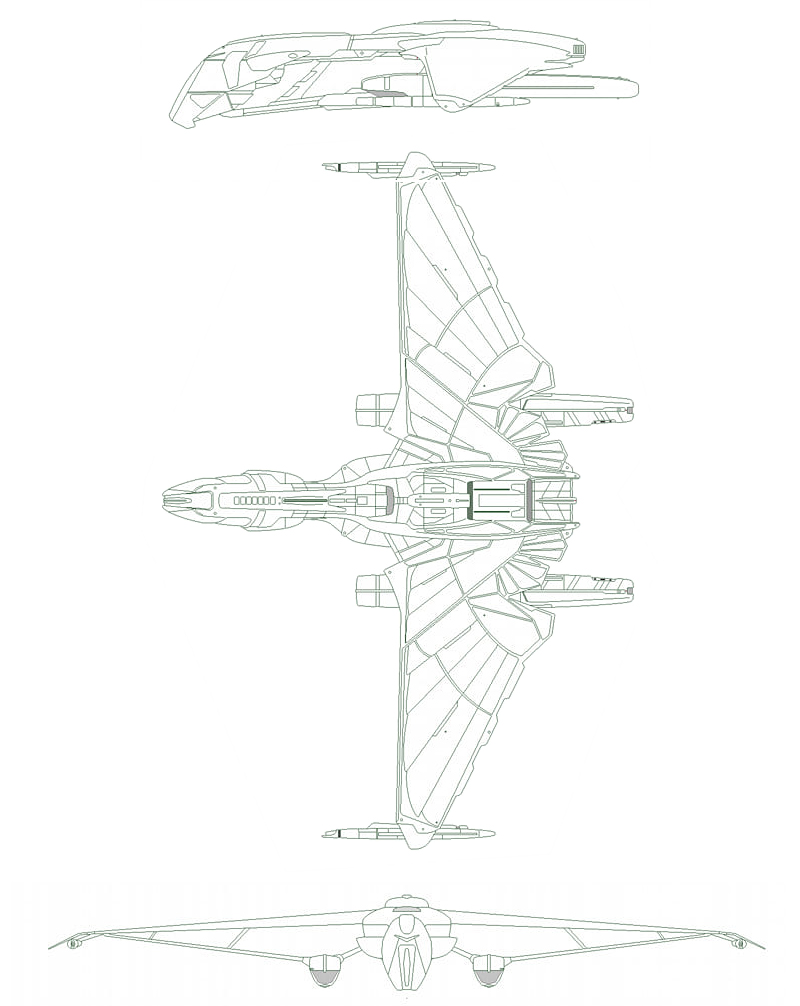 NOTES:
The V-54 was a direct competition design by Reman shipwrights to contend with the older but highly successful V-7 class of light cruiser. Originally intended as a deep space destroyer, the vessels parameters changed several times over the design phase before being classified as a cruiser. Reman designers intended to create a ships whose internal volume could easily be modified to specific mission needs beyond that of the current Romulan designs. Many Reman troops and field personnel had direct interaction with Klingon ships whose internal configuration had obviously changed from ship to ship; the advantage of such capabilities had not gone unnoticed. The final design of the V-54 allowed for a wide range of reconfiguration of internal spaces, creating troop carriers, armed cargo carriers and even mission-specific scientific vessels with relatively short notice. In early 2285 the decision to produce the V-54 was approved and the Darkwing was born.

Although the design concept was useful, the practicality of creating large internal volumes that could be quickly reconfigured proved costly. On five separate occasions, the primary design was changed. In the end, many of the main ship components were fitted into the large wings of the V-54. This provided the space necessary for the required internal layout, but did not reduce production costs. The Type-1 – launched in 2287, was a critical success, with Reman shipyards quickly producing these ships for use against the Klingon as relations continued to deteriorated. The Type-1 was considered the equal to the Type-4 V-7 – it’s most direct competitor. However, the V-54 rarely saw operation that required it’s internal configuration changed. By the time the Type-2 was fielded, nearly every Type-1 had remained in it’s military/combat configuration for it’s notable career.

The Type-2 would continue to be compared to the V-7 whose Type-6 was again nearly identical in it’s operational capabilities and overall combat prowess. While the V-54 had greater firepower, the decision to maintain the established RWE/RWD power plant meant the ship has less power than the V-7. This would be remedied with the launch of the Type-3, which incorporated heavier disruptors in conjunction with the more powerful impulse drive. All type-1’s and Type-2’s were converted to Type-3 configuration by 2340.

In an unusual move, a Type-4 was fielded in 2348. The Type-4 was fitted with the RP-15, which was considered only slightly more powerful than the previous but older FP-7. Approximately half of all remaining V-54’s were converted to this configuration.

While the V-54 saw extensive use against the Klingons, many felt the time to retire the aging cruiser had come. In 2360, many V-54’s were initially mothballed, with some being earmarked for sale. However, the sudden and mysterious loss of numerous outposts and colonies in 2364 halted the sale of many older Romulan ships. While it was discovered that the Federation had no hand in the disappearance of the colonies, the uncertainty of who had destroyed the colonies along with continued hostilities with several boarder adversaries prompted ship designers to refit and update a number of older ships.

In 2371, the Type-5 was officially launched. The design was intended to eventually face the Dominion whom the Romulans hoped would weaken the Federation and Klingons before turning on the Star Empire. However, the Empire was lead to believe that the Dominion was planning a direct attack far sooner than anyone had anticipated, apparently feeling they had sufficient forces in the Alpha and Beta quadrants to take on all three of the major powers. The Type-5 would see significant use by both Romulan and Reman forces against the Dominion beginning in 2374. The Type-5’s that survived the conflict were used as transports and patrol vessels through the former Cardassian Union following the war.

Unfortunately, after the depth of Shinzon and the chaos within the Star Empire, many older vessels were retired or became part of rogue factions within the Romulan sphere of influence. Multiple V-54’s were claimed exclusively by Reman forces. Few ships were able to successfully engage the Klingon vessels that were stationed throughout the Romulan Empire, and by the time the political and economic turmoil settled in 2386, few V-54’s were in serviceable condition. Only one V-54 is known to have survived the destruction of Romulus.