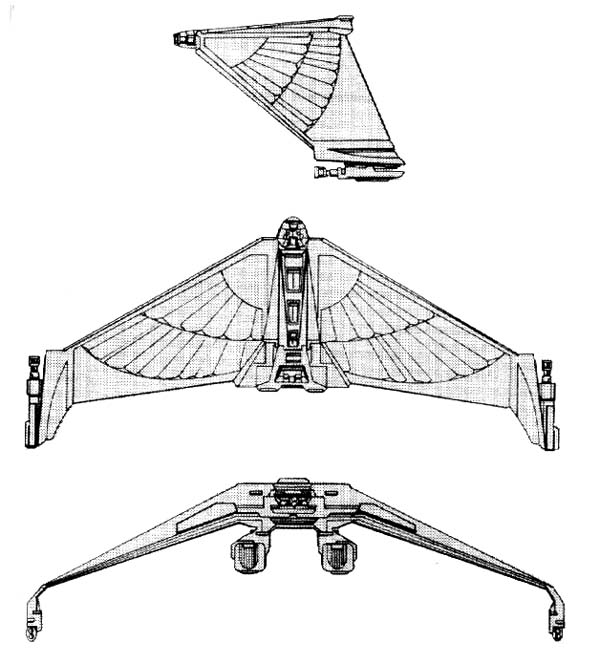 NOTES:
The V-4 class was, by far, the most unusual design to come from Romulan engineers; fashioned like a giant wing, it was created not only for aesthetics but for combat. When the vessels were first introduced, they were intended to lead an expansion effort, but the war between the Klingons and Federation caused them to be sent to patrol the Klingon border. The Type 2 mounted a more powerful impulse drive system and improved disruptors, which accounted for its greater combat efficiency.

The V-4s were painted by crew members in a variety of patterns. These ships, though popular with their crews, were removed from service sometime after Stardate 2/16 for more powerful designs. Of the approximately 135 built, about 65 are in reserve fleets. Six are reported to be used as training vessels, and two are used as spaceborn museums, one each stationed at Remus and at Corill. Eighteen are known to be operating in the civil sector.

On Stardate 1/9611, nine of these vessels are known to have been sent into the Triangle to liberate a small system from the Klingons. The Romulans pressed the attack against the three D-7s protecting the system, immediately destroying two and driving the other away. Flushed with victory, the Romulan commander sent five of his group after the fleeing enemy, but they encountered nine D-7s and three D-l0s arriving to reinforce the area. The Romulans flew into a classic trap laid by the Klingon battle-group, and three were destroyed before getting off one shot. The remaining Romulans miraculously crippled four of the Klingon vessels before one was crippled itself and the remaining vessel fled. The Klingons abandoned the effort and withdrew from the area.

This battle caused a stir in the Klingon High Command, as the ship had never before been encountered. Because the stories told of its abilities were inflated to make the Klingon fleet commander look good, the V-4s enjoyed an undeserved notoriety among the Klingons for many years.

The class is named from the Romulan vastam cl’vangas (wing of vengeance), in reference to the vessel’s combat capabilities.