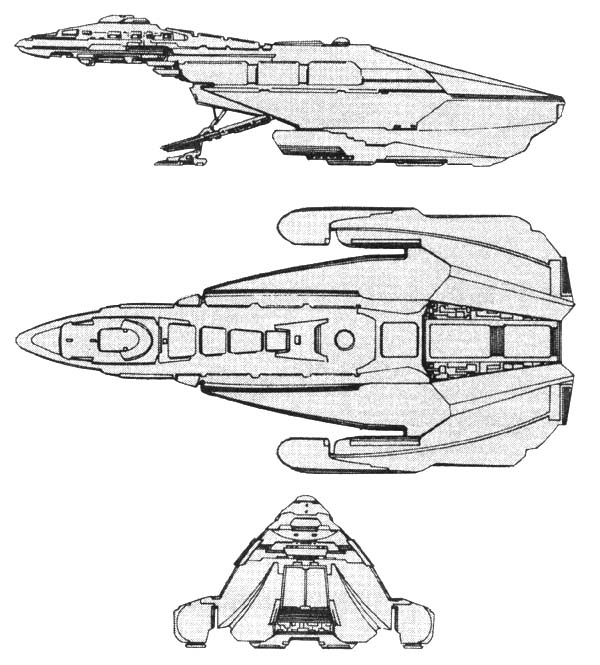 NOTES:
After the Four Years War, the Klingons began to feel the need for more monitors not only to replace the many that had been destroyed, but also to patrol their substantial gain of territory. The K-32 was introduced to solve two problems: to increase the Klingon presence around their servitor territories and to replace the highly unpopular K-30. Ships of this class carry a squad of ten marines for security reasons and possible boarding actions.

After many failures, the KSLB was perfected and installed on the K-32A, allowing it to maneuver well while devoting sufficient power to the offensive systems. The weapons arrangement is highly effective, giving the ability to discharge six disruptors in either the forward or aft arcs.

Of the 571 K-32s built, 279 As and 199 Bs are in reserve fleets, 2 each are used as training vessels, 33 As and 21 Bs have been destroyed, 2 As and 1 B have been captured by private interests in the Triangle, 2 As and 3 Bs are listed as missing, 7 As and 10 Bs have been sold or traded to private interests in the Triangle, and 6 As and 4 Bs are in the service of prominent and ranking families of the Empire.

The K-32s were produced at Taamar and H’rez. The combined maximum rate of production was 15 of each type per year.

The class name is a translation of the Klingon v’al’kon.