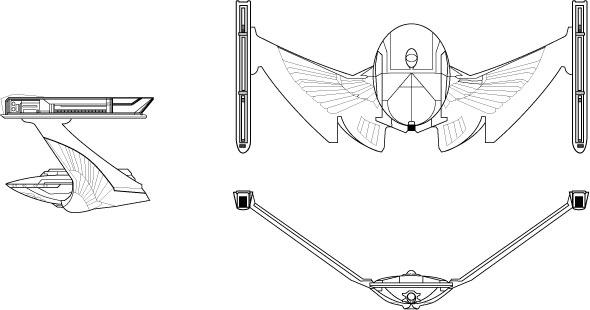 NOTES:
Built along an enlarged and expanded V-1 general hull design, the V-17 greatly increased the overall combat capability of the much older reserve vessel. The V-17 propelled the basic teardrop design back into the mainstream construction run, while easily fulfilling it’s main objective.

When requested, the V-17 was intended to be a direct competition vessel with the mass produced D-7. Simple to design and easy to mass-produce, the V-17 proved effective against the D-7, but did not have the power curve hoped for when first launched. The V-17 also took longer than anticipated to fit out, and production never reached the massive numbers associated with the D-7. Nonetheless, the V-17 did prove an excellent platform for both military and exploratory role missions.

The Type-1 was first launched in 2280, immediately being sent to the Triangle and Klingon boarders for use in skirmishes in those areas. The Type-1 used the newly designed RWE-2 main drive systems. The RWE-2 was less crew intensive and hardier than most other drives of the same weight. It proved nearly as powerful as the Klingon KWC-2, which was incorporated into its nemesis, the D-7. The RWE-2 also allowed many of the coolant systems and other engine support mechanisms to be placed directly into the ample wing structures, something impossible in earlier vessels. This rearrangement of internal spaces provided ample room for the inclusion of larger science
bays, crew recreation facilities and extensive replicator systems. Crew quarters were nearly doubled over the standard size and number associated with other similar sized vessels, as were the sensor bays, which were always considered inadequate on previous Romulan main line vessels. The Type 1 mounted six heavy disruptor emplacements, designed to overlap extensively. Although the location and firing mounts for the RB-11’s took nearly a year to perfect, the resulting firing arcs provided excellent coverage, surpassing anything the Federation or Klingons had at the time. The Type-1 mounted the massively powerful RPL-3 plasma torpedo. With greater range and nearly as much stopping power as the RPL-2, the RPL-3 guaranteed a powerful first strike when used in conjunction with the cloaking device. The Type-1 also incorporated a second aft firing RPL-3, an unusual design to say the least. But the decision to include the aft torpedo did give the V-17 an ability to conduct strafing runs unequaled by any other combat craft. The Type-1 remained in production until 2289, when the Type-2 was first introduced.

The Type-2 saw the inclusion of the new RSP shield system, considered more powerful than anything the Klingons could field on a vessel of similar class. The RSP allowed the V-17 to close with it’s targets before firing it’s weapons, increasing the accuracy and damage from attack runs. Two RP-6 photon torpedoes replaced the RPL-3, which was still limited in range and capability. These newly re-engineered torpedo weapons were immediately successful, surpassing the improved RP-4 and RP 5’s. The RP-6 did not have the overall close in punch of the RPL-3, but was lighter, less power intensive and easier to maintain and repair. The RP-6 was supplemented with the RB-13’s, which were nearly 20% more powerful than the older RB-11’s. The Type-2 also remained in production until the launch of the Type-4. The Type-3 was believed to have mounted the RPL-4, but only 4 were commissioned.

The Type-4 saw the first weight change in the vessel, owing to the larger RWF-3 drive system. The heavier drive did provide more power, something lacking in earlier designs, but was not as maneuverable. Nonetheless, the Type-4 was significantly more dangerous, mounting the massively powerful RB-14’s. The RB-14 was over 60% more powerful than the earlier RB-13’s, and did not require the dangerous chemicals associated with cooling older disruptors. Unfortunately, the RB-14’s did not have the range of the RB-13’s, but was offset by the inclusion of the RSR trinary shielding system. One of the most powerful shield to date, the RSR allowed the V-17 to close to point blank with its enemies, even after de-cloaking, and pound the vessel with both heavy disruptor fire and the newly included RP-7 torpedoes. Although not the most powerful torpedo system, the RP-7, when used in conjunction with the RB-14’s, could easily down the shield of nearly any type of vessel. The Type-4 would remain in production for 20 years, even after the launch of the Type-5. Although some Type-1’s and Type-2’s were converted, most Type-4’s encountered were newly launched vessels. The most recent of the V-17 is the Type-5, lunched in 2325. They Type-5 incorporated the more powerful RIE-3 impulse drive, the longer ranged RB-15 and the devastatingly powerful RP-8 torpedo. The RP-8 heralded a new shift in power, and was the first torpedo design solely created and built by the Romulans. Earlier torpedoes were considered modifications and upgrades to Klingon designs. The RP-8 was a massive jump forward in Romulan weapons technology, and was considered the most powerful Photon torpedo design to date. The Type 5 is still in production, as is the Type-2, although at reduced numbers. The Type-5 takes nearly twice as long to fit out and is not produced in great numbers.

Current production of the V-17 stands at 1 of the Type-2 and 1 Type-5 per year Production was as high as 4 per year, but has dramatically curtailed in recent years. Despite hopes for massive production numbers rivaling the Klingon’s D-7, only 141 V- 17 have been produced to date. Currently, 89 Type-2’s, 31 Type-4’s and 6 Type-5’s are in service, including 1 Type-2 and 1 type 4 converted to type 5 specs. 1 Type 1 and 1 Type 4 are listed as missing. 2 Type-1’s, 2 Type-2’s and 1 Type-4 have been destroyed; 2 Type-1’s and 1 Type-2 have been scrapped, all after combat encounters. 5 Type-2’s are used in the Romulan Training Command, and 1 Type-1 was disarmed and sold to forces within the Triangle. Although the V-17 never replaced the V-11, which was hoped among many Romulan commanders, it did earn the respect and admiration, and remains a popular vessel to command.