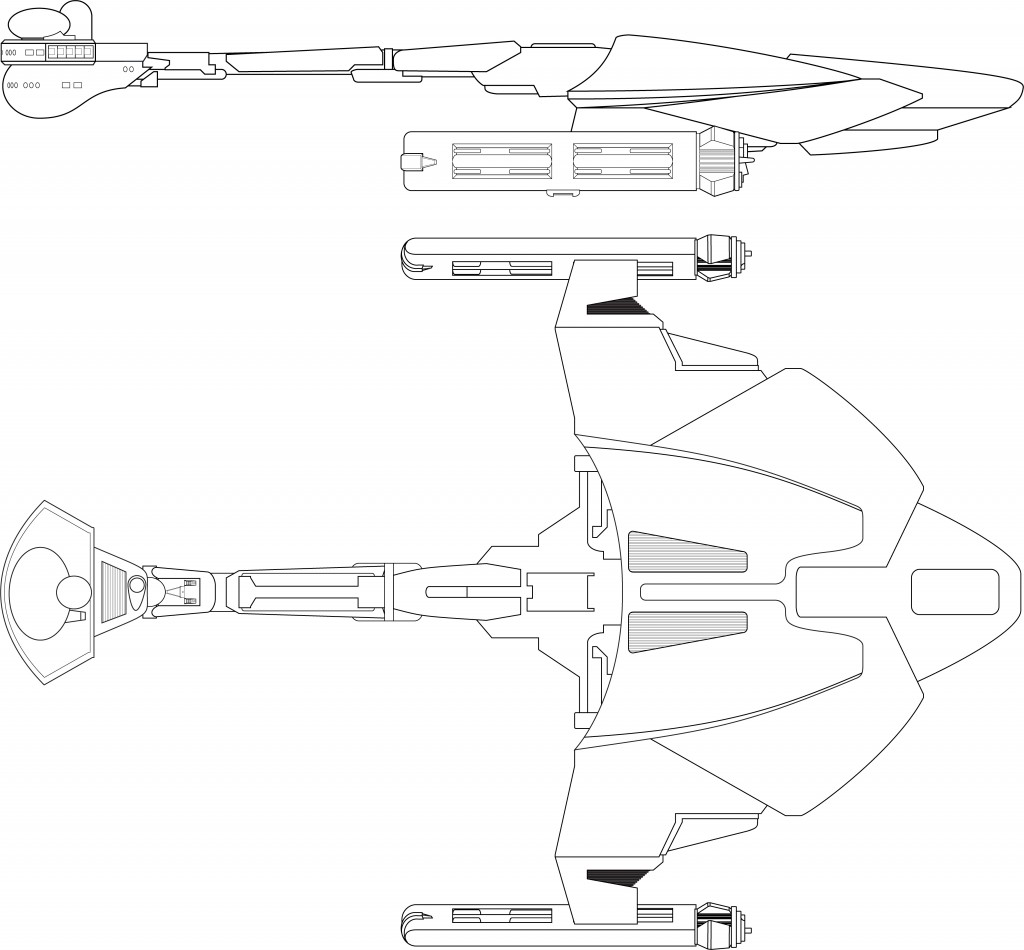 NOTES:
The D-9 cruiser was brought into service during the Four Years War to act as a research vessel. For years, the Klingon Empire had been halted in its attempts at expansion. To the rimward lay the Federation; towards the trailing arm were the Romulans; and it has been speculated that to the core-ward lay some unknown power able to hold the Klingons in check. This left the spinward area, as yet not fully explored. Expansion into this void had been slow due to the great distances from the home-world of Quronos and the apparent lack of suitable worlds for conquest, but the desire to outflank the Federation altered that. The newly constructed D-9 cruiser was intended to lead this effort.

The D-9A prototype was considered to be under gunned and was dropped from production even before it had been commissioned. An up-gunned version, the D-9B with mainly defensive weaponry, was commissioned is 2254 and was immediately sent into the new expansion area. These ships and their accompanying scout ships were to map new areas and evaluate the cultural levels of any races encountered. The war with the Federation ended one year after the D-9Bs entered service, and the sense of urgency for the flanking expansion effort diminished. The flanking movement is portrayed in a Star Fleet commanders test known as Operation Armageddon.

Military planners quickly realized that the D-9B‘s inability to effectively defend it self meant that vital information about potential hazards and enemy forces. The decision was made in 2287 to increase the firepower of the D-9, with the resulting C model incorporating a forward torpedo. However, the increase in firepower was negligible when compared to many of the other vessels the D-9 encountered. Conversion of the B model remained slow, and only 31 new hulls were commissioned. Of the 69 vessels listed in the inventory, 7 were destroyed, 9 are listed as missing (most of which are believed to have gone rogue), 1 was scrapped, 1 was captured by the Cardassians and 10 have been sold. 41 were converted to E models.

In 2297, with the Empire still reeling from the economic impact of the Praxis disaster, the decision to upgrade the D-9 to a more defensible platform was made. The D-9 was finally give some teeth, although was still considered underwhelming as a military craft. Thank to new techniques in miniaturization and equipment production, the D-9E was given the standard KD-8’s as well as powerful but short-ranged KD-12’s. An improved version of the KSK shield as well as an enlarged impulse drive rounded the vessels improvements. Production, although light, continued for the next 35 years until the launch of the D-9E in 2335. Of the 59 new builds and 30 refits, 3 are listed as missing, 8 have been destroyed, 4 have been scrapped, 8 have been sold and 10 are in reserve fleets. 5 have been sold to ranking families in the empire.

The final production version of the D-9, the E model. While many within the Empire felt that the need for research vessels was far outweighed by the need for combat platforms, others argued that the multitude of successful missions of may D-9 (including some posthumously) proved that the Empire still needed an effective version of the D-9. In 2335, production was completed on the D-9E. Conversion of older D-9s began in earnest, while new hulls continued to roll off the line.

The D-9E saw an upgrade to nearly all of the ships on-board systems. A third generation version of the popular KWC-2 warp drive was installed. Lighter and less maintenance intensive that the KWD-1, the new drive allowed the installation of heavier weapons and a significantly improved shield system. The D-9E became a favorite of those relegated to the exploration command of the Empire. While only 18 new ships were built, a total of 110 D-9Es entered service. The D-9E continued to serve through the conflicts with the Cardassians, Romulans and even through the Dominion War. 4 were destroyed, 1 was scrapped and 65 were placed in reserve fleets. 30 have been sold, 5 have been traded and 5 are in the service of ranking families.

The D-9, named “Seeker” from the Klingon “z’gal”, was manufactured at Gnuu Re, with production peaks at three per year.