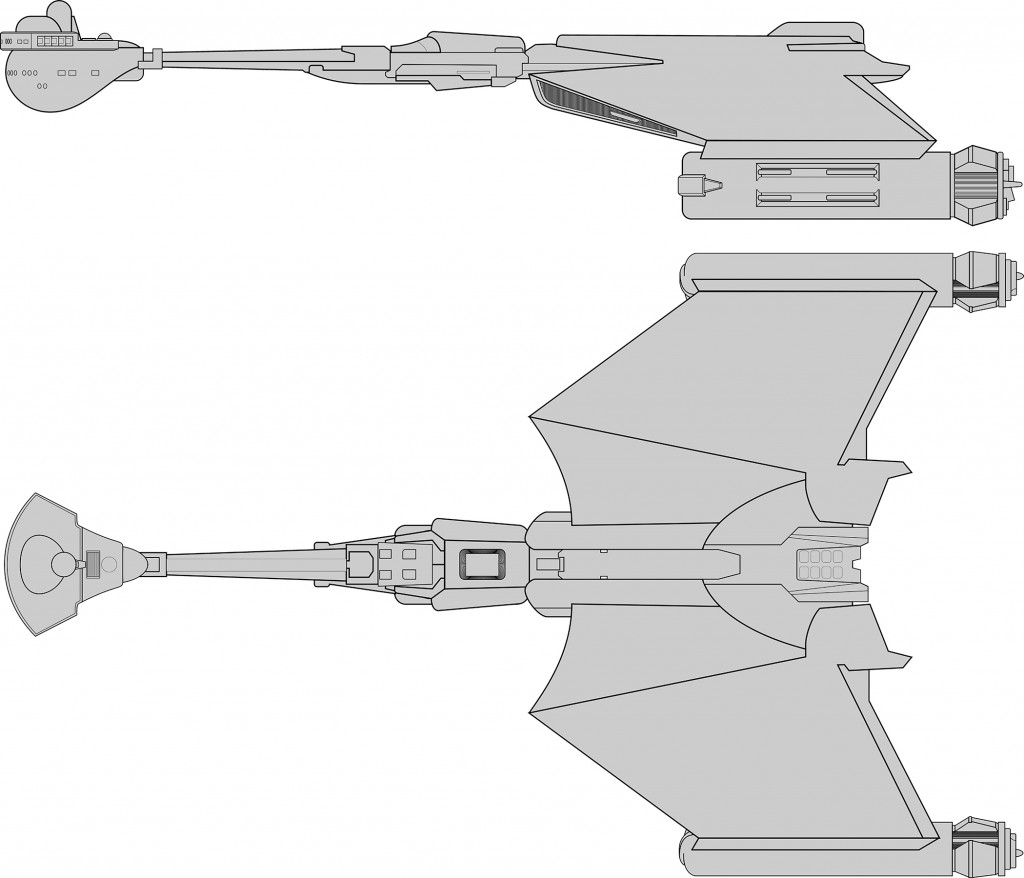 NOTES:
In the early 2260’s, the Klingon Empire found itself in need of a new class of light cruiser for internal patrol and survey duty in areas that were pacified sufficiently to not warrant the attention of a more powerful ship of the line. Too often, fleet planners found them selves detaching front-line combat cruisers or destroy squadrons to conduct follow up surveys, scouting missions or minor pacification missions for which a battle-cruiser was an unwarranted use of resources. The Empire’s growth was quickly outpacing its military capability, and many felt that a cruiser that utilized older and well established components, most notably those that were easier to produce, could easily be constructed in large numbers to allow heavier patrol vessels to continue to push the boundaries of the frontier. Many of the major houses put fourth designs intended to make use of quick construction processes that each house claimed they would implement. After considerable debate, the decision was made to use the basic design specs of the now aged but popular D-16 destroyer.

The core structure and layout of the D-34 is largely identical to the D-16, with a number of its hull components nearly identical to the older destroyer. The secondary hull retained the overall shape, but was enlarged to house a larger cargo hold and additional crew facilities. Designers relocated one of the forward disruptors to supplement the aft disruptor as well as relocating several senior officer amenities to the main hull. This allowed the installation of the powerful KP-3 torpedo as well as the upgrade of the main disruptors to the KD-5 model. The main power-plant consisted of the KWC-2 warp drive and the larger KID-1 impulse drive. The D-34 was not as maneuverable as other light cruiser, and in fact was less maneuverable than the D-16. However, it additional power allowed the installation of the KSE shield system, providing increase protection.

The D-34A was officially introduced in 2263, but would not see full production until 2267. Political infighting and a failed second attempt at war with the Federation continued to hamper production of the D-34. While the design did prove adequate in its major role, the vessel was already outclassed by several other newer ships. In total, only 30 D-34A’s were produced.

In 2276, High Council members were looking for ways to streamline the military budget, even as they planned for war with the Romulans and the Federation. Numerous designs were slated to end production early, with the D-34 being one of them. House Dok’Marr and Jurris both continued to back the D-34 and presented several design upgrades in the hopes of keeping the design alive. The D-34B would prove to be a far more effective design with the inclusion of the powerful KIE-3 impulse drive. An enlarged computer allowed for the use of the KSO shield as well as an upgrade to the major tactical systems. Launched in 2278, the D-34B would again proved adequate in it’s patrol role throughout the Empire.

While funding for an additional 100 D-34B’s was approved, both Dok’Marr and Jurris realized that the more popular D-32 was far outpacing the D-34. Only 33 additional D-34’s were built before production was ended and fund re-appropriated to the Bird-of-Prey design. All D-34A’s were converted to D-34B, however. Of the 63 D-34B’s placed in service, 4 have been destroyed, all after combat with the Romulans. 2 are listed as missing and 1 has been scrapped. The D-34 was produced at the Mustaka shipyards.