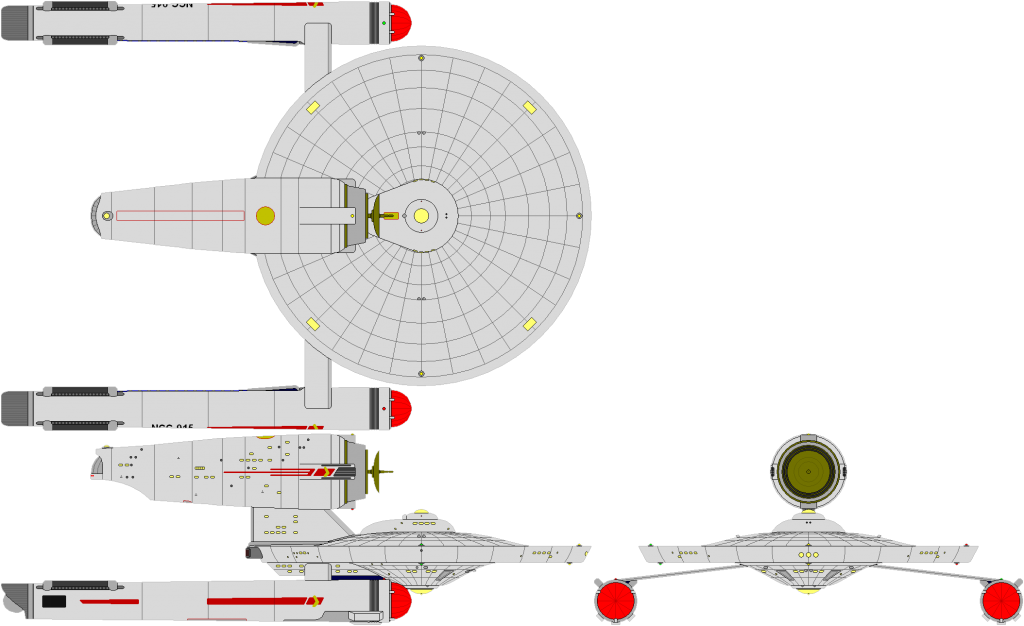 NOTES:
The Star Ranger was designed to arrive quickly in an area of space and bring it’s full research and exploration capabilities to bear. To help achieve this goal, the decision was made to move the main engineering systems into the primary hull and re-engineer the secondary hull to support labs, science station and crew quarters. Unlike its cousin, the Maine class, the Star Ranger placed the Astrophysics labs in the primary hull to take advantage of the direct plasma energy from the warp power system.

The Star Ranger also used a wider “stance” with it’s warp nacelles. This design gave the Star Ranger greater acceleration, although fuel consumption was slightly higher. The wider stance of the nacelles also allowed for more accurate sensor readings while at warp, making the Star Ranger a prime candidate for FTL research missions.

The Mk I was also an effective light cruiser in combat, with two engaging Klingon forces during the Organian conflict. The Star Ranger her self was also instrumental in curtailing pirate operation near Orion space. The Mk I’s maneuverability and medium firepower meant it could easily engage raiders and other medium class vessels with success.

In early 2268, the Mk III was launched. The Mk III, which would go on to server into the late 2270’s, was well armed, with combat capability surpassing other vessels in it’s class range. The Mk III’s massive and powerful FP-4 torpedo system made the ship tremendously dangerous at medium range and planners immediate began investigating the use of the Star Ranger as a major combat platform. However, the FP-4 was not as easily integrated into the Mk III as previous thought. By 2270, two separate incidents had the main torpedo system releasing radiation into the lower hull of the ship after firing the FP-4. The resulting investigation would go on to produce the improved firing tubes of the FP-4 found on the Enterprise class and later vessels, but the Star Rangers required a suppressant system be installed to counteract the torpedoes radiation. The system was installed on the five new ships to be built, but could not easily be installed on the previous seven hulls still in service. The decision was made to retrofit these seven into the new Star Range II class.

Of the 12 Star Rangers fielded, 7 Mk I’s are being converted to other classes, while 5 Mk III remain in active service. The Star Ranger was constructed at New Aberdeen and Proxima Centaur shipyards.