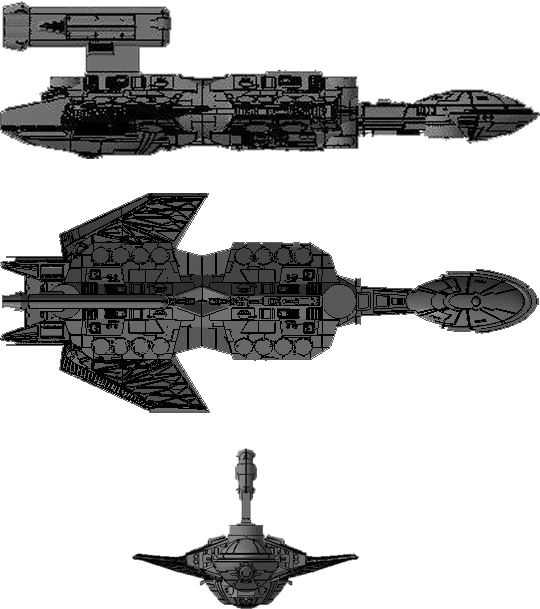 NOTES:
The Lup Nep (Transport of Lies) Diplomatic courier was developed exclusively for the Klingon Diplomatic corps. These ships are regarded as a punishment duty for those in disgrace but who have powerful family or political influence.

Light armament and low speed make the K-33 a perfect insult to those out of favor within the Empire. Because of their lack of powerful armament, the Federation finds them preferable for negotiations with Federation members. The Lup Neps are welcome at many neutral outposts as well, making them useful for commerce, smuggling or covert operations.

This has be used to advantage over the years, with some K-33’s used by the Klingon spy network for years.

However, the K-33 remain under-powered, under-gunned and unpopular with nearly all who serve onboard. Only the relative comfort of the Diplomatic Quarters provide any redeeming qualities, with many diplomats and negotiators happy with the provided spaces.

First fielded in 2265, the K-33a was immediately considered under-powered for its mission role. The nearly non-existent weapons systems as well as underwhelming shields provided significant internal volume which was quickly utilized for conference rooms, communication facilities and unusually comfortable guest quarters for ambassadors and diplomats. However, the vulnerability of the ship would often be seen when rendezvousing with even Orion representatives in deep space. Because of their mission profile, many K-33’s operated without significant escorts. By 2280, ship commanders demanded an improved version. The K-33b, launched in 2283 was so similar to the ‘a’ models that is was not put into production. It would be 7 years more before an improved version was finally fielded. By the time the K-33c was approved, two K-33 had been destroyed, 1 had been scrapped and 4 were listed as mission. A total of 33 K-33a’s were converted to the C model.

The K-33c was a significant improvement over the K-33a, but was still considered underwhelming by all standards. An improved computer, heavier weapons and improved shields could not bring the K-33 to any real combat standard. The K-33c’s new warp drive did provide additional power, but the vessel was still woefully under-powered when compared to other front-line vessels. An incident in 2293, shortly after the loss of Praxis would highlight the continued failings of the K-33. While negotiations with the United Federation of Planets were approaching a conclusion, the new Chancellor, Azetbur, ordered an immediate stand down of all aggressive action against Federation. Known that many Fleet leaders and squadron commanders would find this order untenable, she ordered house leaders to dispatch physical orders rather than transmitted orders. Surprisingly, the head of house Duras, which was making significant profits from their actions in various border areas, was specifically ordered to dispatch various house leaders within the hour to stand those units down, withdraw and return family units to Quonos for decommissioning. Duras dispatched several Lup Neps with the Chancellor’s envoys to stand his fleets down. In secret, though, house leaders then sent out some of their fastest ships to overtake them and “change” the Chancellor’s orders. When the Duras fleet that arrived at Quonos, it was later found that only older ships – many on their last legs or captured from other houses – that had arrived. Later estimates would put the total number of decommissioned House Duras ship at a 3rd or less of their fleet. It is believed that the rest went into hiding at an unknown location.

While it was not until later 2300 that this ruse was truly discovered, the K-33’s lack of speed continued to be highlighted by opponents. The ‘d’ model, launched in 2308, did little to address the speed and power issue, instead increasing the main disruptors in an attempt to placate opponents of the design. An improved shield system was also installed, but was considered inadequate when compared to other systems of the day. The K-33d retained it’s comfortable internal compartments, though, with many diplomats touting the class’ record during negotiations. One diplomat claimed that nearly 90% of all the resources that had been purchased over the years to help save the home-world had been thanks to the comfort and capabilities of the K-33.

The K-33 remained in disfavor, and by 2320, nearly all had been relegated to negotiations with various Orion factions through out the Triangle. By 2330, only 27 remained in active service, with plans to scrap most of the remaining vessels already in the works. Despite the unpopularity, the K-33 was still in use as diplomat attempted to negotiate favorable outcomes to the ongoing Breen and Cardassian conflicts. Deteriorating relations with the Tzenkethi further put pressure on the Empire to curtail the use of combat vessels for the use of negotiations. By 2342, the K-33g was fielded, with all 27 hulls eventually converted. The ‘g’ model saw an increase in power and primary weapons, but could still not compete with even the lightest enemy warship if needed.

The final variant – the K-33h would see no conflict until the Dominion War. While used extensively before the conflict, the K-33h was once again relegated to the safe areas of the Empire, with negotiations primarily conducted with Klingon allies. This quickly changed after the brief conflict with the Federation and the far more significant conflict with the Dominion. The K-33h was rushed to the front lines to help diplomats negotiate treaties, port use and resource procurement during the early days of the war. Despite increased power and weapons, the K-33h could not stand against the Jem’ Hadar’s fighter craft for any significant amount of time. By wars end, 5 K-33’s had been destroyed and 6 more had been scrapped after combat. 3 more have been listed as missing. The K-33 was finally decommissioned in later 2376 and the remaining 8 vessels were scrapped the following year.

The K-33 was produced at the Quronos shipyards at a rate of 5 per year. All refits were also performed at Quronos.