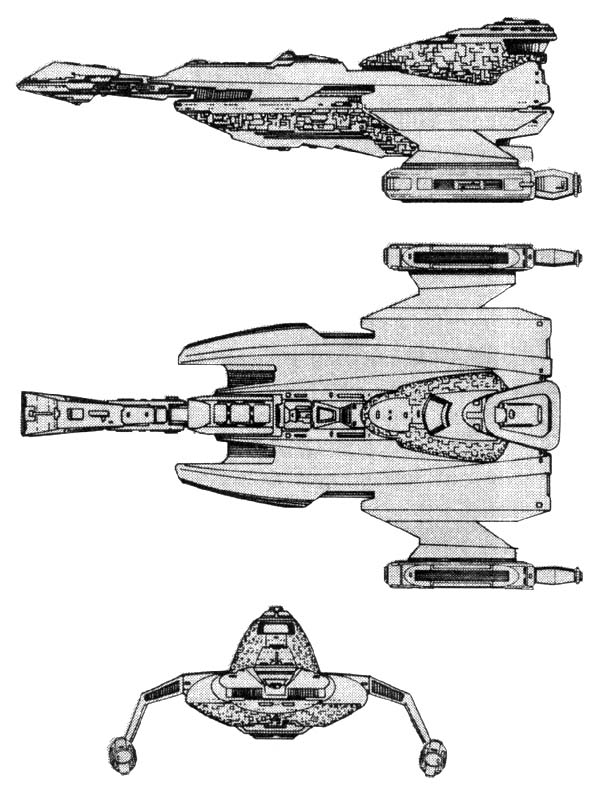 NOTES:
The L-24 is the largest warship in the Klingon navy. These mammoth ships were commissioned into service prior to the testing of the Federation battleship Excelsior. For a short period of time, the balance of power along the borders turned in favor of the Klingons.

The battleship uses the most powerful warp and impulse engines in the Klingon inventory. The combination of these power plants gives these vessels a highly efficient maneuver ratio and allows them to sustain speeds of Warp 6 for long periods of time. The warp engines are mounted on pylons to keep them from the main hull of the ship, and, as with most newer designs, they can be jettisoned in case of emergency. The L-24 differs from other Klingon ships regarding the shielding provided to the engineering technicians. Most other Klingon vessels have minimal engine shielding, and servitor races are trained to operate this equipment; in the L-24, Klingon citizens operate the engines.

The L-24 mounts eight KD-8 disruptors in banks of two, and four KD-13 disruptors. The KD-8’s are mounted two banks on the command pod and two banks on the main hull. The KD-13’s are mounted on the rear of the main hull. The battleship can fire as many as ten disruptors and two photon torpedoes in some areas of the forward arc, giving this ship a definite advantage in most situations. The KP-6 torpedo, which is mounted in both the fore and aft positions, can inflict as much damage as the most powerful torpedo in the Federation arsenal.

The interior of the battleship is compartmentalized to reduce the dangers of decompression during battle. This makes the structural integrity of the ship much greater, as seen by the high superstructure strength rating. The deflector shielding for the L-24 is the best the Klingons can produce at this time.

The bridge is located in the forward pod. This typical Klingon bridge design is capable of being separated from the main hull in case of emergency. The bridge of the L-24 has an auxiliary impulse engine that can be used only after separation; it gives the command pod the ability to travel short distances and allows minimal maneuvering. The pod mounts two of the KD-8 disruptor banks, which are capable of firing in all directions when separated from the main hull. Also mounted in the pod is a torpedo bay capable of firing torpedoes, though the torpedo storage is minimal.

Like most Klingon warships, this vessel carries assault troops. The 480 troops and their eight light support vehicles are capable of being transported to the ground in less than seven minutes.

As of 2284, only two L-24s had been commissioned into service. Both vessels were often scanned along the Federation border and were known to be working that area. Intelligence gathered from Operation Dixie suggests that the L-24s would also be stationed along the Romulan and Triangle borders in the near future. Further data gained by Operation Dixie suggested that these battleships were originally produced at two facilities. The first models were manufactured at the Taamar shipyard, and it is believed that the second facility was Gnuu.

Even as production of four more L-24s was underway, a new L-24B was in the works. Launched in late 2287, the L-24B used the KD-13 exclusively as the main beam weapon. Increased armor and an additional two forward torpedo tubes made the L-24B more popular than the L-24A. Production of the A model was halted after the destruction of Praxis, with production of the B model significantly reduced. Only 6 type As were fielded, while a total of 28 Bs were launched.

The L-24C would be brought into the inventory in early 2315. The C model saw a significant change in the battleships load-out, replacing the KWG-1 warp nacelles with the more powerful KWG-2. An enlarged impulse drive also saw increased overall power with the more powerful KD-19’s replaced the main forward disruptors. Two of the aft disruptors were replaced with aft torpedoes, making the L-24C the most dangerous version of the popular battleship.

In later 2328, the L-24D was commissioned. The D model saw a significant shift in the overall primary capability and mission support system of the L-24. A second primary computer core was installed, as were improved impulse and warp drives. However, the D was significantly more expensive and was produced in more limited numbers.

The final variant, the L-24E was produced as a refit variant only. Begin in 2345, the first converted E model was finally launched in 2350. While much of the ship was improved, including new computers, engine and weapon, the most significant improvement was the installation of the powerful KNSE deflector system. This gave the L-24 the ability to directly compete with their Romulan and Cardassian counterparts.

The class is named from the Klingon “komo val”, which translates to “always in victory.”