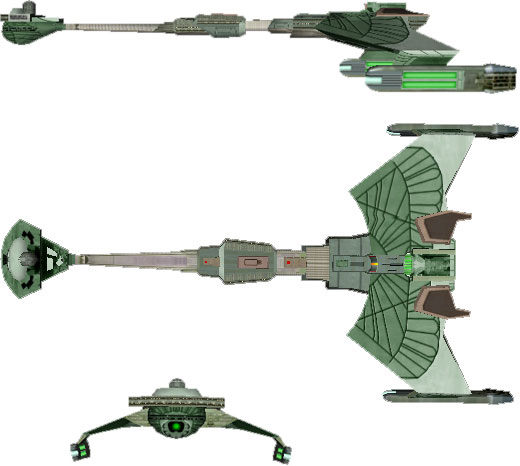 NOTES:
The T-16 conversion of several captured Klingon D-16 destroyers is believed to be the first successful attempt by the Romulan Empire to field “converted” vessels of the Klingons to create dissension and discord among both the Federation and Klingon Empires. The T-16 was specifically designed to emulate the D-16 in both appearance and on sensors. Although only 4 were ever captured and converted, all four accounted for dozens of successful raids into Klingon territory and helped to keep Klingon protectorates within the Triangle uneasy and off-balance.

The Type 1 was a direct conversion of three captured D-16. Romulan engineers’ immediately set about reinforcing the hull, nearly doubling the structural integrity of the vessel. Designers also managed to fit the more efficient RIB-3 impulse drive into the vessel, yet retained the Klingon Warp Drive. The Klingon disruptors were replaced as well; but more significantly, Romulan designers were able to fully camouflage an RP-2 torpedo within the primary command boom. The torpedo could remain concealed until fully powered giving the converted destroyers a significant advantage over their Klingon brethren. Yet designers were unable to replace the T-16’s Klingon designed shield system. This proved dangerous to operatives on several occasions, and nearly destroyed one of the vessels.

The T-16’s days as a secret raider were numbered. Even as the Type 1 was operating successfully in the Triangle, the Klingons were already replacing the aging D-16 with other more modern and capable combat craft. By 2271, it was clear to nearly every government who might encounter a T-16 that they were most likely engaging a Romulan craft. Designers began to immediately re-design the four main hull in the hope that upgrading the ships would prove less costly than building four new destroyers. After several initial concepts, engineering students finally designed an inexpensive replacement version of the RWC-2 drive. The primary drives layout also allowed the installation of the RIE-1 impulse drive, doubling impulse power. The Type 2 became a plasma torpedo raider after an PRL-3 torpedo was installed. The D-16’s basic hull design, with it’s elongated boom, allowed the T-16 to arm it’s plasma torpedo while cloaked, reducing its cloaked sensor signature by nearly 47%. The T-16 once again became an excellent raider and conducted over 100 various raids on Klingon and affiliated targets throughout the Triangle area. Despite it’s power and stealth, one T-16 Type 2 was destroyed near the IKS boarder by Klingon forces. Although unconfirmed, it is believed that the T-16 engaged three D-7’s, destroying one and damaging the remaining two before it was lost.

Two of the three remaining T-16’s were once again upgraded in 2281. The powerful and long range RB-11’s were fitted, as well as a new RP-5 torpedo. Requiring significantly less power to arm than the Plasma torpedo, the Type 3 was actually sent again Federation targets near the Klingon/Federation boarder. Reports indicate that both Klingon and Federation forces increased their vigilance after the squadron attacked cruiser squadrons in the area. While no cruisers are know to have been lost, the resulting disruption in patrol schedules gave Klingon commanders confidence to attack weakened defenses. In response, the Federation was forced to pull several units from the Romulan boarder to protect their interests.

Currently, the Type 2 and both Type 3’s remain in active service, although they are spotted almost exclusively in the Triangle. It is unknown if the Romulans are planning any further upgrades of the vessels or if they will be retired any time soon. The T-16 is believed to be named as a direct insult to the Klingons.