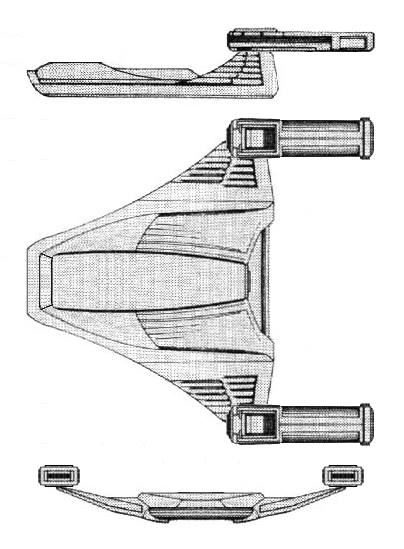 NOTES:
Well love and well used, the R-2 escort was a mainstay of the Romulan fleet for nearly 50 years, serving effectively along the Triangle and Klingon boarders as well as against the Gorn in it’s later service life. The basic layout and surprising roominess of the space frame made it popular among naval personnel as well as those who would later purchase these vessels as they finished their naval careers.

The R-2 was based on the S-2 (which would go on to serve as the CS-2 courier). Unlike it’s scout cousin, designers rearranged the internal layout to mount twin nacelles on the outer wings. The sensor emplacements normally found on the S-2 wings were consolidated to a single bank and relocated to the forward section of the vessel. The sensors were not as sensitive as the scout’s, but were still considered accurate enough to provide tactical advantage in the R-2 escort role.

In late 2246, the Type-1 was launched and immediately sent to combat the rising number of attacks by Orion raiders in the expanding Triangle area. The Type-1 mounted the powerful R-4m main computer, which some felt was excessive for the ships stated mission. However, the R-4m was quickly becoming the “go-to” mainline computer for the Empire. The computer was soon put to the test with the use of RPL-1 main weapon to supplement the vessels beam weapon.

Escort commanders would use the plasma torpedo to devastating effect throughout the R-2’s service. The escort was always used in pairs, even when escorting a single freighter or transport. This allowed one vessel to use it’s beam weapons while the other used it’s plasma torpedo. The tactic could easily demolish most enemy vessels and Orion, Nausiccan and even Klingon raiders quickly learned to avoid being trapped by the maneuver.

In 2254, as word of the deteriorating relations between the Klingon and Federation became more publicly known, the Romulans decided to field a more powerful version or the R-2, fearful that the Klingons would attempt to waylay larger amount of raw material being shipped from the Triangle frontier to the core-worlds. The Type-2 used the more powerful RWC-2 power plant and warp nacelles, which gave the escort a power curve equal to most light cruisers of the day. The main disruptors were also replaced with the new RB-3a used as the primary beam weapon. This effectively doubled the overall firepower of the R-2. The dreaded Klingon push never came as the Empire focused nearly exclusively on the Federation, but the R-2 Type-2 did see action against the Son’a who had made inroads in the Triangle and along several Romulan boarder areas. The R-2 help deter the Son’a, and later the Orions for a number of years.

When Photon Torpedo technology finally became mainstream within the Star Empire, the Romulans fielded the Type-3 variant of the R-2. While other escorts were now in use, the R-2 was still a popular choice along the Triangle boarder. Launched in 2261, the Type-3 mounted a forward and aft RP-3 torpedo, giving the R-2 excellent attack capabilities. The Type-3 was used almost exclusively in squadrons of 3 and often used to escort military equipment and raw materials throughout the empire. Many units included a mix of Type-2’s and Type-3’s. This mix of vessels proved effective in 2266 when a mixed raiding group attempted to waylay a convoy from Dren Avastam II in the Klingon conflict zone. The hired group of Nausiccan and Antaran raiders had been supplemented by the Klingon who had hoped to destroy the convoy after the raiders drew the escorts off. With a second wing of R-2’s and a group of R-4’s involved, the Nausiccans were nearly wiped out and the Klingon cruisers who attacked less than an hour later found themselves facing a two-to-one battle. The convoy survived and Klingons were forced to withdraw heavily damaged.