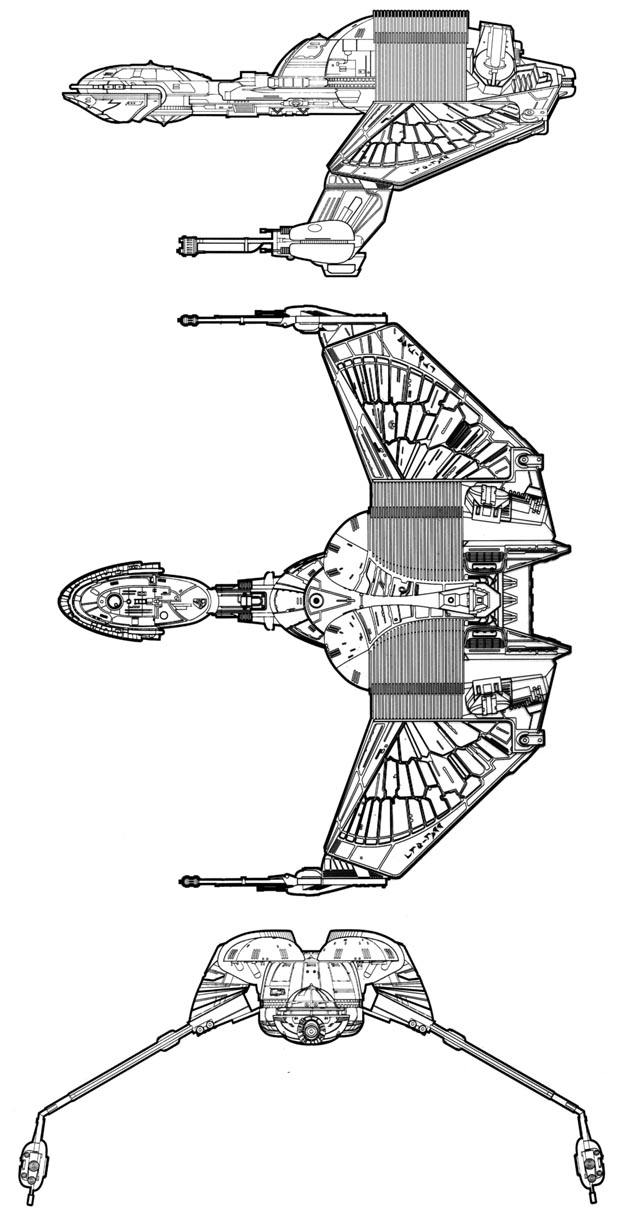 NOTES:
The improved S-11 (Bird of Prey) is probably the most formidable of all enemy scout ships facing the Federation. It is the first blending of Klingon and Romulan technologies to come from the exchange agreements between these powers. The improved power plant is housed in a Klingon-designed compartment made for survivability during combat; the addition of the photon torpedo tube is a direct result of Klingon influence.

The S-11 is believed to be the first scout ship to use the cloaking device for deep-space penetrations of UFP and Klingon territories, which theretofore have been performed only by larger capital ships. The Romulan High Command apparently now feels that the survival potential of the S-11 is just as great as for larger vessels, probably because of the scout’s size and cloaking ability.

As of this date, only the Type-1 is known to exist. Consistent with Romulan methods, other types probably are in the making, if not already coming on line. None of these vessels have passed into the private sector at this time; 82 are known to actively patrol both the Klingon and Federation borders. The Klingon version of this vessel is in Star Fleet possession, captured by Admiral James T. Kirk.

This design so intrigued the Klingons that, as part of the treaties of Stardate 2/1801, they insisted that a small number of these vessels be exchanged for plans of improved Klingon weaponry. At the signing of the treaty, seven of these vessels (named Strong Bird by the Klingons) were given to the Klingons, along with a modified version of the famed cloaking device. Within a year, several larger prototypes of this design appeared in the Klingon inventory, a mimicry the Romulans do not find flattering. As the relationship between the Klingons and Romulans has become more strained, Romulan commanders are reported to be increasingly nervous at the fact of having to someday face these giant clones.

The class takes its name from the famed V-8 Class cruiser, because of the similarity in the designs of the two vessels. It is proving to be worthy of replacing the cruiser’s notoriety as a hit-and-run vessel.