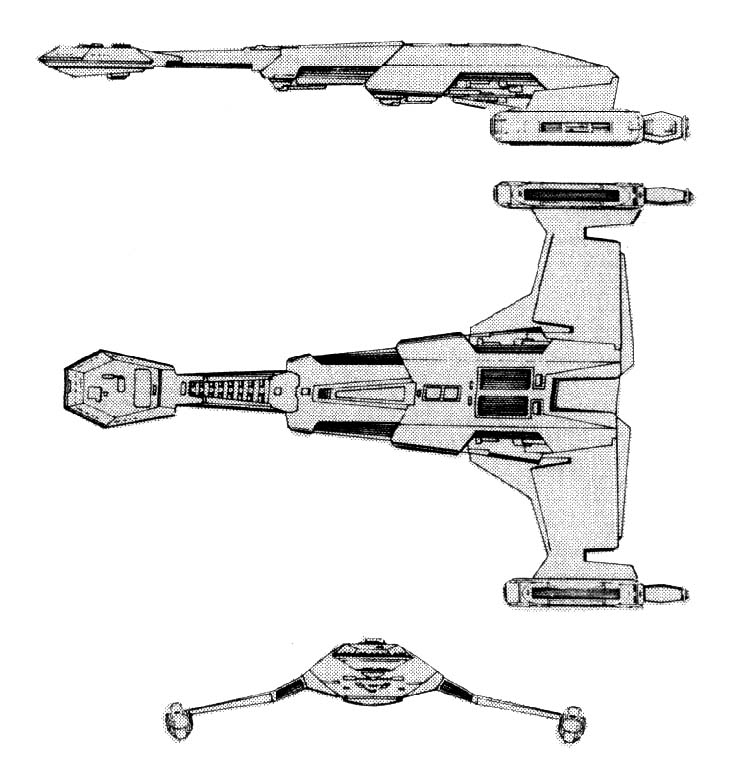 NOTES:
Shortly after the discovery of photon technology, the Klingon Imperial Navy initiated a program for a missile-armed destroyer. Several designs were reviewed and tested before the D-2A was commissioned on Stardate 2/1201. Five months later, the D-2B entered service, different only in the arrangement of its torpedo bays. The D-2 is an excellent offensive weapon against ships of its own class, but it is not able to hold its own against larger ships due to the lack of range its torpedoes have and a relatively weak superstructure.

These missile boats mount KWC-1 warp engines, which gives them good tactical maneuverability. Each mounts two KD-6 disruptors covering all areas of fire as well as four KP-2 photon torpedoes. The D-2A’s torpedo bays are split evenly forward and aft, allowing it to close with and pass through the enemy’s formation, firing torpedoes into usually unprotected aft areas. All the D-28’s torpedo bays are mounted forward, giving a tremendous amount of punch from the front but none from the rear.

In early 2340, with relations between the Empire and the Federation strained, planners began a significant update to the now aged D-2. The decision to refit all the aft firing vessels to forward firing ships was considered controversial, but would later serve the Empire well years later. Refits were rushed between 2340 and 2344 until the Romulans once again too center stage with there attack on Narendra III. The newly refit D-2g would serve well against the Romulans but would server with distinction during the Dominion War. Over 300 would serve during that conflict. Currently 320 remain in active service, although most are now used for escort duty due to their extreme age. 2 are listed as missing, 31 have been destroyed, 24 have been scrapped and 4 have been captured. Most D-2’s are on schedule to be retired by the end of 2400.

The D-2 class was produced at losia and H’renn. Intelligence estimates these facilities produced a combined average of twelve of each type per month.

The class is named from the Klingon vkarzadan, which translates to “the tongue that stings”.