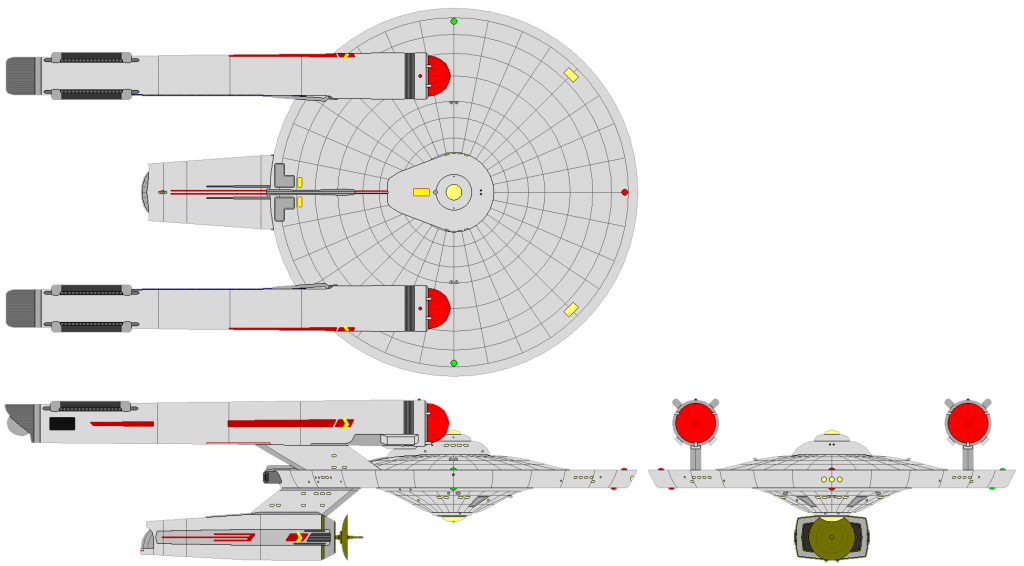 NOTES:
Planned from the outset to incorporate the latest in military technology, the Collins frigate was a marvel of efficiency and sturdiness. Begun at the outset of the war, the Collins class was immediately the most expensive single mission profile vessel built for Star Fleet. A minimal lab facility and moderate exploration facilities were installed, but the main focus of the Collins was combat. Armed with four new FH-4 phasers and twin banks of FP-1 torpedoes, the Collins was immediately thrust into the war effort.

The Collins was fielded at the perfect time to showcase it’s abilities. When the Collins was launched, the war had turned for the Klingons who were no longer able to field sufficient ships for the massive fleet engagements where their numbers often proved decisive. The Klingons were now forced to engage in ship-to-ship or single squadron engagements. While this meant glory for the various Klingon commanders, it often meant posthumous honor as superior ship tactics and the new weapons systems were proving superior. All four Collins that were involved in combat during the conclusion of the war reported success. During the Battle of Kolm An, all four deployed their troops with significant success as well.

After the war, the Collins was mothballed, with plans to scrap the vessels. However, even as several older classes were being dismantled, it was clear to many that the Klingons had not simply gone away and that future conflicts were likely. Designers re-activated the Collins construction project, and by 2264, nine had been built and fielded. In early 2265, the first upgrade was launched, and the continued cold war with the Klingons pushed designers to request an additional 20 hulls be built. In the end, only 15 were authorized.

The Mk II did increase the impulse drive, but more importantly replaced the mid-ranged FH-4 with the longer range and more powerful FH-8. Combined with a more efficient shield system, the Mk II was son assigned to rapid-response forces and began patrolling the Orion boarder in small squadrons. When the Organian conflict began, numerous Collins immediately moved to engage targets of opportunity. While smaller than the Klingon D-7’s, the Collins was equally the match of the larger Klingon vessels. Once the Organians ended the conflict, the Collins returned to their patrol of the Orion boarder where they became effective pirate hunters.

In 2274, the decision was made to refit the Collins class. Like the Enterprise and Miranda classes before it, the Collins was placed on an engineering refit schedule that would see significant changes.

Of the 22 Collins built, 1 Mk I was destroyed. The remaining Mk I’s were converted to Mk II. The Collins was built at the Salazaar and Merak facilities.