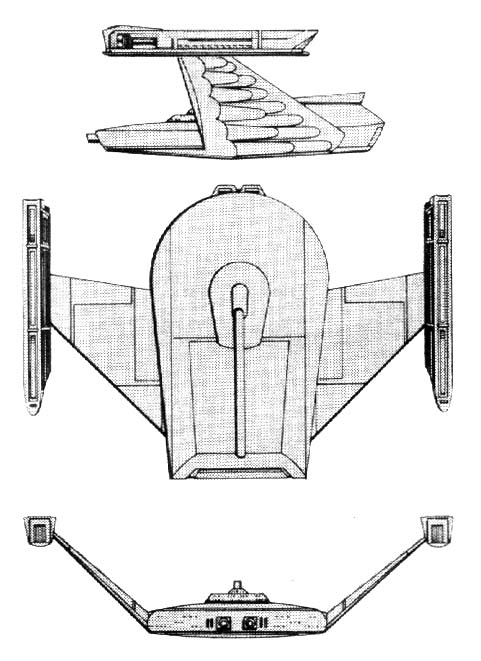 NOTES:
The V-9 class, created from plans for the older V-8 (Bird Of Prey) class, was constructed in response to the need for increased firepower and speed. Its similarity to the V-8 on casual inspection is responsible for the prolonged myth that the V-8 was the mainstay of the Romulan Navy.

The Type-1 was introduced about Stardate 2/0805. It was the first vessel in the Romulan fleet to carry two plasma weapons, and it had an impressive array of disruptors and a cloaking device. This vessel reportedly became extremely popular with front line commanders, because of its ability to deliver multiple plasma weapon strikes. It did not, however, address the speed problem still seen in the concurrent Type-4 V-8, and several power plant changes resulted in the successful Type-6.

Of the approximately 305 V-9s constructed, about 260 remain in active service; of these, some are known to be assigned to Romulan Intelligence as training vessels. There are reports of these vessels operating within the Triangle.

The class is named from the RomuIan temar vastaram (night flyer), in reference to a small, nocturnal, flying predator native to Remus. The Eridam Papers state that they were the source of many ancient legends and myths about invisible predators from another dimension.