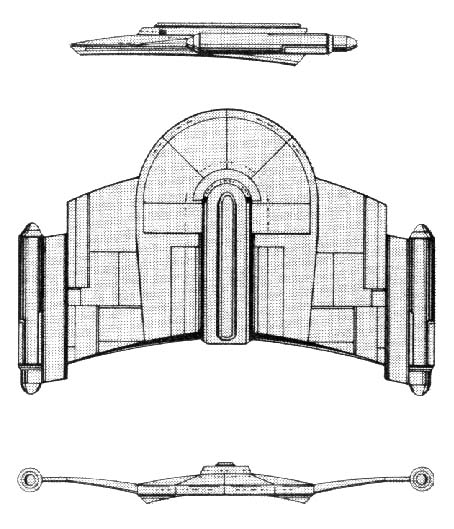 NOTES:
The V-6 class was considered to be the ultimate replacement to fill the need for both a military vessel and a research vessel. Designed much like Star Fleet research cruisers, they are well equipped for research duties and for combat.

At the time of their introduction about Stardate 2/09, they were the most powerful ships in the fleet. The Type-1 mounted six of the most powerful disruptors available and the RPL-2 plasma weapon. Although these vessels never saw combat with any Federation ships, it is speculated that this model would have been an even match for a Constitution Class cruiser.

With the Type-5, introduced about Stardate 2/11, the combat efficiency improved because its more powerful disruptors, more efficient shields, and stronger superstructure. At this time, all Type-1s were recalled for refitting to the new configuration, and, by Stardate 2/13, this process had been completed. The Type-5 remained in service until about Stardate 2/22, when all had been converted to the Type 7.

The Type-7, introduced on Stardate 2/1607, mounted improved engines and was structurally improved. Vessels of this type are expected to remain a mainstay of the active Navy.

They Type-8 was the last major modification of the V-6 and served will into the 2330’s before finally being retired. An improved computer and enlarged impulse drive gave the Type-8 sufficient firepower to allow the Romulans to hold the boarder with the Klingons, while continuing their military activities against the Gorn.

Of the approximately 100 V-6s built, nearly all are in reserve fleets. One Type-1 operates as a private research vessel, appearing infrequently in the Triangle. Romulan Intelligence reports that 83 reserve fleet units are Type-8’s. Several reports from the Klingons indicate that some V-6’s were reactivated during the Dominion War.