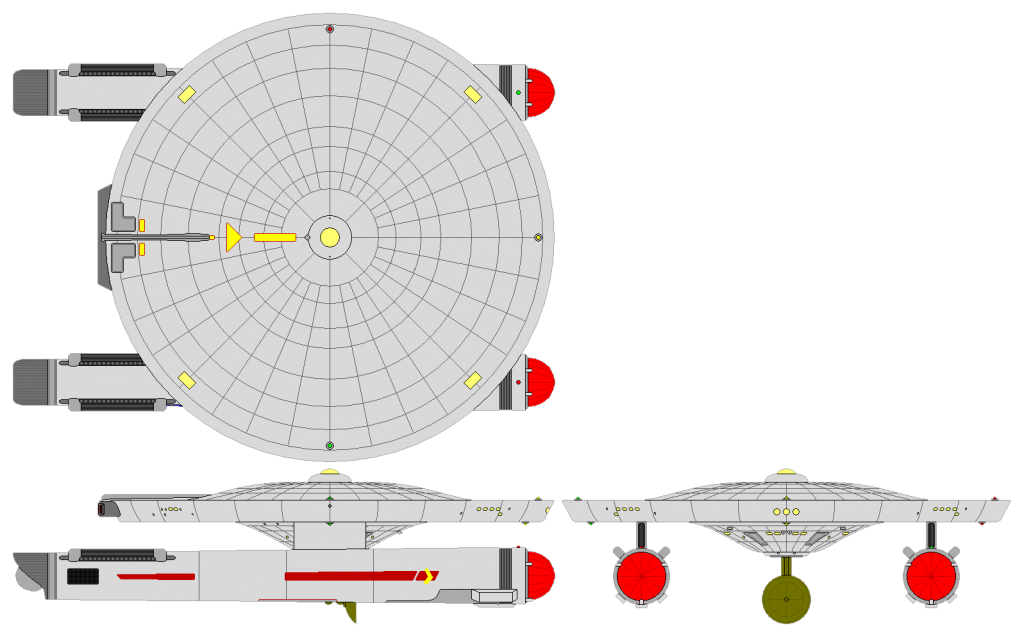 NOTES:
The Burke class was built and fielded as one of the most basic of Frigate designs in Star Fleet. Designed in 2243, the basic frigate was intended to be a mid-ranged patrol frigate with a medium contingent of troops able to intercept and engage pirate vessels anywhere within Federation territory.

The Burke was also designed to operate in small squadrons, either with other Frigates or Destroyers. The Burke was never intended to operate without some support, and no provisions were made for the vessel to operate as a full fledged independent combat vessel. The Burke remained inexpensive to build and operate and surprisingly comfortable for both Naval and Marine troops.

The Burke was not without it’s detractors. Even as the sting of the Donatu V attack a year earlier faded, many felt that Star Fleet needed far more powerful and heavily armed vessels to combat the growing Klingon threat. While pacifist blocks continued to bemoan any increase in military spending, fleet commanders wondered if heavier armed vessels were the answer. The Burke class could be built in less than a year, and in its initial combat tests, the lack of diverse weapon systems was made up by it’s maneuverability and ease of repair.

This would cost the Burke class dearly when war finally erupted. 15 Burke class frigates were ready for action when the Klingons finally launched their initial attacks of the Four-Years War. At the Battle of Andromeda, four Burke frigates and six Portsmith destroyers engage three Klingon D-7’s. While on the fringes of the main engagement, one D-7 is crippled and the other two begin to withdraw. The Federation force perused suddenly finding two squadrons of D-4 coming up from behind. The Federation force took heavy casualties as a second squadron of D-7’s broke off from the main battle and raked the now fleeing Federation ships. Across the battlefield, the Klingons superior numbers over-matched the Federation superior tactics.

Some designers also complained that the close in location of the main Warp nacelles forced the use of heavy radiation shielding. Some also claimed that sensor efficiency was reduced for the same reason. However, fleet planners, now needing every vessel they could muster, continued to field the Burke in a combat role.

At the Engagement for the Argelian Approaches, the Burke Mk II proved that the design was still viable. Sitting well out of range of their opponents, the new Phasers installed on the Mk II prove devastating, sniping and damaging Klingon ships who could not hit their targets from such a great distance. With 8 Mk I’s and all 5 mk II’s surviving the war, planners vacillated on whether to scrap the Burke or mothball the vessels. The decision was made to continue fielding the class until a suitable replacement could be produced. Surprisingly, the Mk III was launched before the Burke was retired. With a larger impulse drive and far superior shielding, two new vessels were commissioned. However, many still complained that the craft was underwhelming in it’s firepower and could not support it’s mission objectives. In 2267, the decision was made to retire the Burke class.

Of the 24 Burke’s built, 9 Mk I’s were destroyed in the Four-Years War. 1 Mk I is listed as missing. The remaining vessels were refit to other classes. The Burke was built at the Salazaar shipyards.