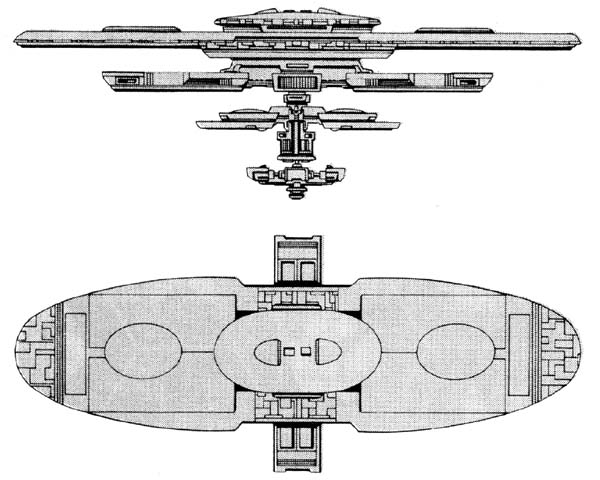 NOTES:
Soon after the signing of the treaties that ended the Romulan/UFP War, the Romulan High Command began to establish border outposts along the Neutral Zone to insure that no vessels entered Romulan space.

From the outset, it was obvious that these stations would have to be built on location. This meant that construction, maintenance, and quartering facilities would have to be established at the same time. Construction completed, these facilities were left in place to create a broader and more self-sustaining base from which to work. Because of this, a Romulan outpost resembles a spaceborn city, with its many structures and high levels of traffic.

The officers and crew of these outposts are the best the empire has to offer. They support several outlying listening posts and a small detachment of warships. The outposts bordering the Triangle and the Neutral Zone support entire fleets.

On Stardate 1/8008, the first of 80 such outposts was made operational at 8.2S 7.3E, anchoring the arc of the Neutral Zone. From the first, it was capable of gathering intelligence and monitoring ship movements well past the boundaries of the Zone itself, as well as throughout the Imperial Klingon States inside the Triangle.

The commissioning of the Type-6 on Stardate 2/0609 signaled a new era. This station, located at 12.6S 7.5E at the sensitive spinward tip of the Triangle, was powered by the new RMAPG-4 engine, which boasted an increase in power of 67%, and used the RIPG-2 instead of the older RIPG-1. The weaponry was improved by upgrading the disruptors and by adding the new RPL-3 plasma weapons. The shielding was upgraded and the superstructure strength was increased by 40%. Beginning Stardate 2/2007, the four outposts bordering the Triangle were refitted. Known as the Type-7, they also have improved shielding and an increased superstructure. Refit of all Type 1s and type 3s is projected to be completed by Stardate 2/2606. The class is named from the Romulan vas’calanam (territory of birds).