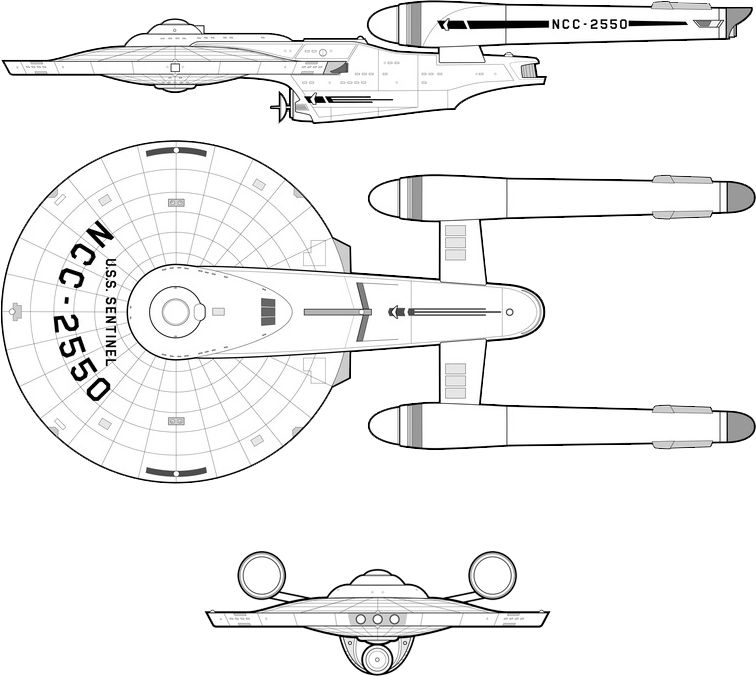 NOTES:
One of the first ships designed to use the various advancements made during the Four Year’s War, the fast attack Sentinel cruiser was to be equiped with a binary shield generator, phasers, speedy FWD-1 engines, and photo torpedoes. The war drew to a close though before the actual construction of the first ship was finished. As the focus in peacetime switched back towards exploration, production was delayed in order to incorporate the upcoming FWD-2 warp engines that traded top speed for the efficiency needed on long voyages. Despite the ability to perform the same 5-year missions as the larger constitution class and second only to them in fire power, the new Sentinel light cruisers were cheaper to build and used more readily available systems. Those qualities meant that Starfleet had both the capacity and funds to produce the ship at roughly twice the pace of the larger constitution class and they were a frequent site on the front tears over of the following decades. The class quickly made it’s mark both in terms of exploration as well as holding their own in various border skirmishes. In order to keep the sentinel class state of the art, D Mk II was introduced on 2/09 mounting the newly developed FP-4 torpedo, more efficient try nary shield generators, and an improved impulse engine ensuring that the sentinel light cruisers remained formidable ships on the expanding frontier.

On 2/14, Starfleet decided to refit the Sentinel class using many of the same system is being developed for the enterprise. The significant changes to the Sentinel class for more measured that of the constitution class allowing an almost simultaneous rollout despite the later start. The Mk III introduced on 2/17 mounted the improved FSP shield generators, the more powerful FIF-1 impulse engines, and the new FWG-1 engines along with the M-6 computer needed to run them. While the almost legendary engine efficiency of the earlier sentinels was gone, the much higher total power output combined with the higher speeds and maneuverability more than made up for it. Just like the previous versions, Sentinel remain work capable with only a single functional nacelle. Fire power was increased with the addition of rear facing weaponry replacing the secondary cargo/shuttle bay combined with additional forward torpedoes (albeit of lower yield). Production was increased to the highest rate (six per year) since their initial introduction with plans to refit all existing vessels to the new standard within five years.