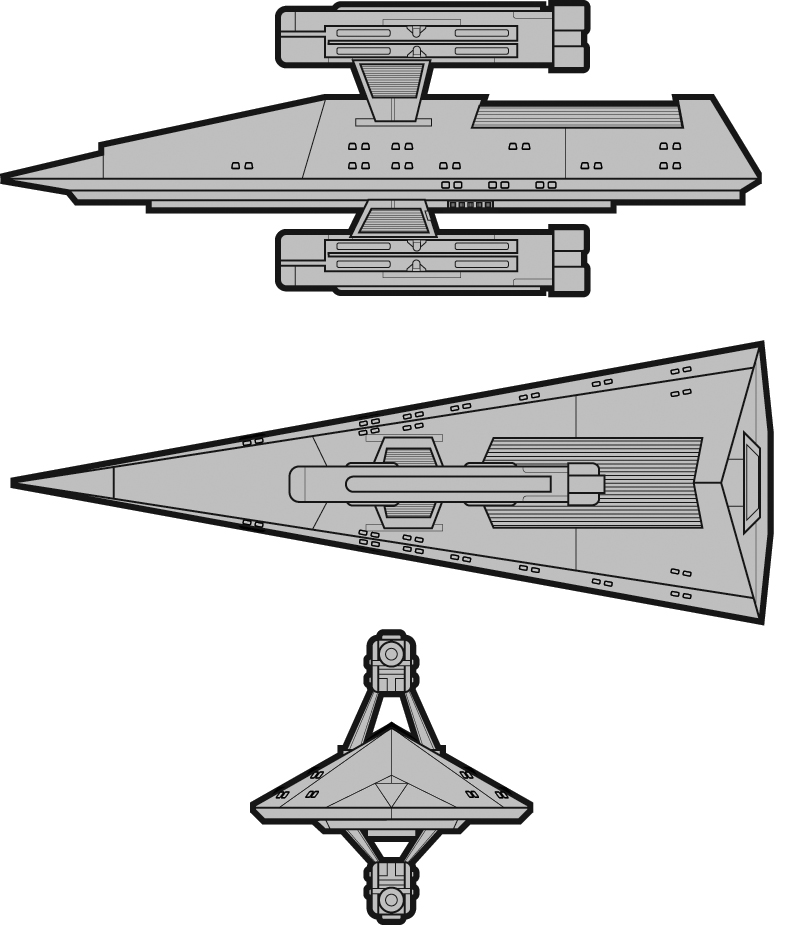 NOTES:
The Swift Solara is known throughout the Orion Neutral Zone as one of the fastest, most successful Slaver/Blockade Runners in the area. Fitted with an unusual warp engine arrangement, the vessel is capable of speeds in excess of Warp 10 in times of emergency. With her two warp engine nacelles positioned centrally on the top and bottom of the hull, the Swift Solara displays a unique appearance from the more ordinary vessels with rear mounted engines on the top of the hull. Tests have shown that through some still as yet not understood principle of warp matter/anti-matter balance, the vessel is able to attain greater speeds with more safety using this up and down warp engine nacelle configuration.

The Swift Solara is equipped with four Type OD-4 disruptors positioned port and starboard between the top and bottom engine supports and forward port and starboard in front of the bridge. A Type OD-5 disruptor is located on the rear of the vessel above the impulse engine. This gives the Swift Solara all round fire and places its heaviest armament aft to be used in chase situations. Although not heavily armed, the vessel would be able to defend itself against similarly sized opponents and would be able to run away from anything larger that it could not handle.

A shuttle hangar is located just below the upper warp engine nacelle and houses two Type J-1 Klingon shuttlecraft. The main offloading conveyance, however, is a large 30-person transporter which is used for slave cargo as well as other general cargo in the hold. The regular crew of thirty individuals normally use the five-pad transporter located in the forward part of the ship.

There are ten passengers staterooms located aboard the Swift Solara. These can be used for up to 40 passengers at one time with the utilization of the four folding bunks located in the wall compartments in each stateroom. This allows any of these accommodations to be converted into single (normally for VIPs), double, triple, or quadruple berths with little or no problem. When all the staterooms aren’t being used during a voyage the empty ones can be converted into additional slave quarters and can house between five and ten additional slaves each. Appropriate recreational and dining facilities are also provided in the passenger area.

The Swift Solara can be seen operating in various regions of space around the Orion Neutrality Zone. It has been known to make forays into Federation space from time to time but must be constantly on guard for the numerous Starfleet patrol vessels that abound in this area. Various Klingon planets along the Orion Frontier are steady customers of the Swift Solaria and the Klingon Imperial Navy usually turns a blind eye to these operations. Lately some of the most profitable planets visited have been located in the Organian Treaty Zone where neither Klingon nor Starfleet jurisdiction exists and the Organians permit (or ignore) most non-violent activities such as that conducted by the Swift Solara. Here many planets pay top credit for the chance to buy green Orion slave women and other rarities from the Orion planets.

The Swift Solara is one of a kind, the only vessel of its class. But due to its successful nature a number of imitation vessels are now appearing around the Orion Neutrality Zone that could almost be considered sister ships. They all differ in tonnage and purpose but the unmistakable top and bottom warp engine nacelle configuration shows them to be unmistakably a copy of the Swift Solara type Slaver/Blockade Runner. As has been proven, any vessel in the smaller tonnage ranges (30,000 tons or less) which uses a variant of the Swift Solara warp engine configuration can expect a speed advantage versus a vessel of the same power and with a standard configuration.