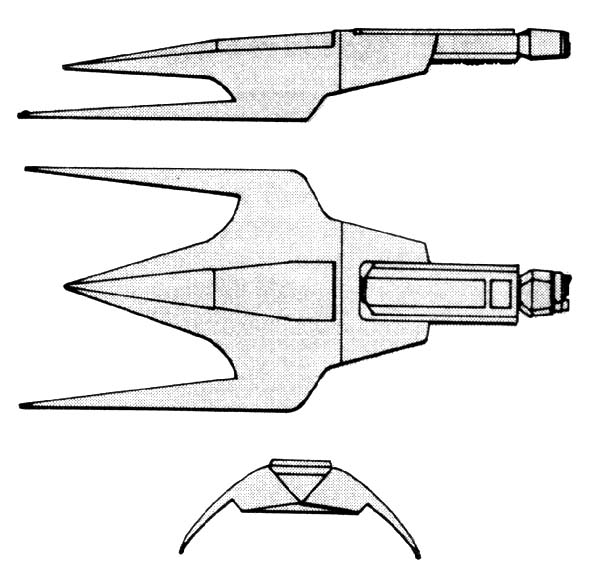 NOTES:
The Night Blade began its career as the IKV Adamant Decimator in 2250 and served well in the Imperial Klingon navy for well over 10 years. However, in late-2260, the Decimator was transferred from the Triangle boarder and assigned guard duty. In 2265, it became very apparent to much of the Blade’s crew that the captain of the vessel was claiming that what little glory the vessel did receive, mostly from chasing down renegades and Orion pirates in the region, was solely due to his skills. The captain continued to file false reports of crew disloyalty and inability, further inflating the captains skill. In 2267, the navigational officer shot and killed the captain in a fit of rage during an engagement with two Orion raiders. Because the captain had not been killed in honorable combat, the crew realized that they would all be black-listed and even as the battle raged voted unanimously to defect to the IKS.

The long and arduous journey to the far side of the Triangle took over five months, with the small gunboat arriving in IKS territory in late 2267. After vetting, the crew was tasked with repairing the Night Blade. The crew quickly learned that the smaller resource need of Gunboats and lighter vessels in the IKS meant that they had the pick of new and purchased equipment. Although sufficient spare parts were available to repair the damaged impulse drive, the crew elected to replace the drive with one of several recently purchased RIA impulse systems. While this required a lengthy software rewrite to ensure the new drive functioned properly, the Night Blade was eventually relaunched and assigned to one of several gunboat units tasked with securing IKS space.