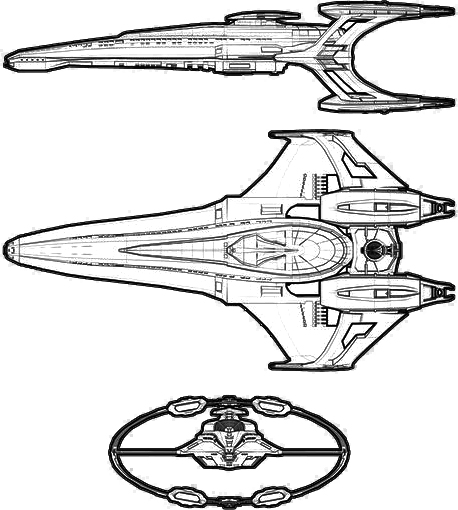 NOTES:
The Majestic is considered by many to be one of the most luxurious and ostentatious Orion blockade runners ever produced. Designed as a show piece, the Majestic is larger than most Orion vessels, and is one of the few Orion ships to use a quad nacelle design.
Launched in 2270 to surprising fan fair. Internal cabins on the Majestic are large and luxurious, with individual crew quarters as large as most officers quarters on other vessels. The entertainment gallery onboard is a three deck high replica of the Andorian Grand Palace. A second more private meeting space is modeled on the Terran Versaillas Salon de Mars. Despite its opulent layout, the Majestic is also a surprisingly capable transport and pirate vessel.
The A-1 model is fitted with a Nausican main warp drive and shields, supplementing the standard Orion equipment. Heavy disruptors and a powerful main torpedo gave the A-1 the ability to strike quickly and effectively against multiple targets. The A-2 model saw a significant upgrading of the weapons, and replacement of the deflectors after the inability to obtain replacement components for the Nausican shields.
The A-2 is still in service and operates across the Triangle. The Majestic operates for both the Klingons and the IKS, a situation that so far has been lucrative, if tense.