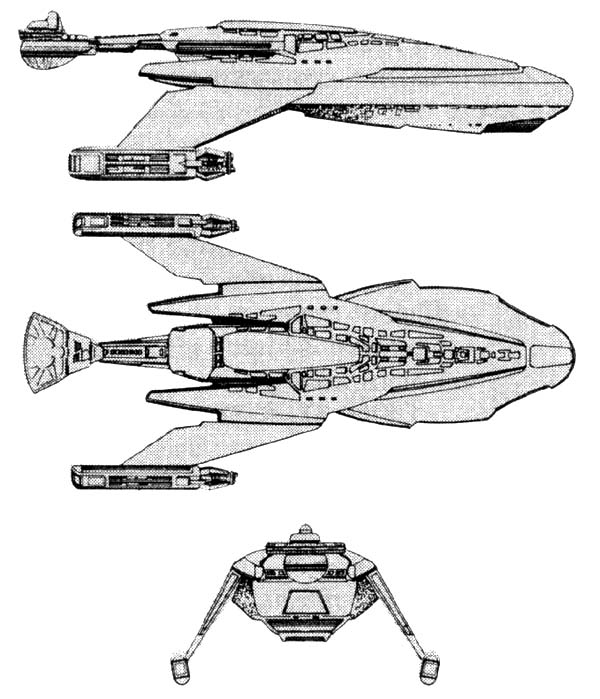 NOTES:
By 2286, 531 G-8As had been built with production finally ending in 2294 with a total of 632 A models fielded. 408 G-8As were converted to G-8Cs, 191 have been destroyed, 17 have been captured (6 by Star Fleet, 6 by Orions, and 5 by the Romulans), 8 are listed as missing, 5 have been scrapped, and 2 have been sold to private interests in the Triangle. 1 is in service to Ranking Families in the Empire.
In 2289, a B model was produced, increasing the engines from the KWB-2 to the KWB-3. However, only 6 were produced before production was halted.
THe G-8C was the first (and only) tactical update to the G-8. Four additional disruptor mounts were added, giving the freighter extensive defensive firepower and reducing the overall reliance on multiple escorts in hostile territory. However, the C model’s expense, additional crew requirements and lengthy production requirements in the post-Praxis era meant that only 74 new hulls were constructed before production was ended in 2310. Despite it’s age, the G-8 continued to serve well into the 2340’s. Including refits, over 480 G-8C’s were commissioned. 6 G-8Cs are listed as missing, 81 have been destroyed, 4 have been scrapped and 9 have been captured (4 by the Romulans, 1 by the Breen, 2 by Cardassian forces, 1 by Talarian forces and 1 by Tzenkethi forces.) 2 were sold to Ranking Families in the Empire. In late 2355, the Empire sold over 300 reserve units to various buyers across the Beta quadrant. 80 more sere traded to various sources throughout the triangle and frontier.
The G-8s were produced at Taamar, Fonawl, and Z’hai with a maximum production rate of 18 per year. The class name is from the Klingon plen zha, translates to “trader’s game”.