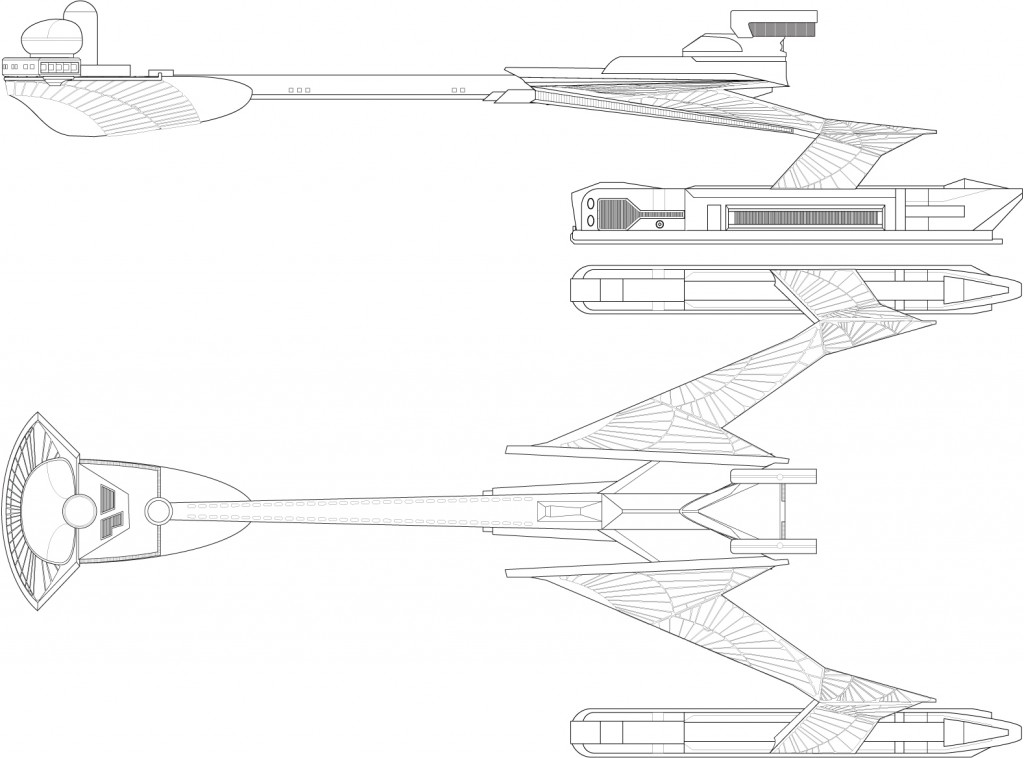 NOTES:
The M-41 was originally fielded after the purchase of a number of Klingon L-3 hulls in 2267 as part of the early technological exchanges between the two empires. While the Romulans did not field traditional frigates per se, they were well aware of the usefulness of the design and requested a number of hulls in exchange for additional mining equipment. For their part, the Klingons hoped to keep the Romulans dependent on dilithium to power their traded Klingon designs. The Romulan of course immediately updated the traded hulls and sent them against first the Klingons, then the Federation and finally against the Gorn.

The first three iterations of the M-41 saw the Romulans attempt to field three different combat focused versions, all launched in the same year. The Type 1, Type 2 and Type 3 all corresponded with the L-3A, L-3B and L-3C models that were traded. As was standard at the time, the Klingons removed nearly all of the major components except the main power plant, allowing the Romulans to use native equipment to bolster the design.

The Type 1’s main weapon design included the medium ranged RB-6’s and a single bank of RB-10’s. This gave the design excellent medium range combat capability with the ability to focus a single heavy attack at longer range. They Type 2, similarly, used RB-9’s and RB-11’s to extend the main weapon ranges. Neither the Type 1 or Type 2 included a torpedo, however, the Type 3 did include a single RP-3. In combat trials, all three variants proved effective, with ship commanders easily utilizing the unique weapon load-outs to great advantage. The M-41 remained in general service through the 2270’s and 2280’s, but began to show it’s age by 2285. By 2290, the class’ unpopularity and lagging capabilities had relegated it to more mundane tasks well within the Romulan Empire. Many M-41s operated without their troop compliment.

The destruction of Praxis within the Klingon Empire and the subsequent failure of the Tal-Shiar to initiate a military conflict between the Klingons and Federation forces designers to reevaluate many older ships in the fleet. It quickly became apparent that the Klingons were turning their military efforts toward the Romulan Empire. While a wide range of new designs and technologies were on the horizon, the need to ships in the field could not be ignored. The M-41 was scheduled for update in 2291, but was rushed into full-scale refit after Praxis.

The Type 4, 5 and 6 M-41 were again designed to provide field commanders with unique diversity in combat capability. The Type 2 was the first group to complete conversion to the Type 4. Although difficult to complete, the addition of two RPL-4 plasma torpedoes gave the Type 4 a tremendous advantage at close range. The three Type 1s were converted the following year to the Type 6. Two RP-5s and an improved long-range sensor system highlighted the three conversions. The Type 7 saw the installation of the more powerful RP-7. However, there was insufficient room for the improved sensors.

The M-41 remained in service through the 2330’s, serving admirably against the Klignons and eventually the Federation. Even after isolating themselves from much of the galactic stage, the M-41 was a common site along the Triangle boarder and continued to be part of front line task forces against the Klingons.

The M-41 had always been under-powered, however. Not wanting to invest significant amount of money into upgrading an unpopular class, is was not until 2333 that the M-41 saw a significant power improvement. Hoping to maintain pressure on the Klingons while expanding trade and territory elsewhere, the decision to install a quantum singularity drive gave new life to the M-41. Designers allowed shipwrights on Remus to replace significant internal volumes and standardize the remaining vessels.

The Type 8 became a powerful and capable patrol craft, serving well into the 2260’s before officially being retired. Improved shields, weapons and warp drive all contributed to the M-41’s continued viability.

When the Romulans finally entered the Dominion War, nearly 40 M-41 were quickly automated and sent into combat. Most saw combat with a number being severely damaged in the first few days of battle. However, the M-41, like most older vessels reactivate during the conflict, proved vital to maintaining pressure on the Cardassians and Dominion, eventually leading to victory.

Following the war, all M-41 were again mothballed and remain in reserve fleet status. Although many have been damaged over the years (some severely) only 2 M-41s have been destroyed. The vessel is named after an unpopular small predatory bird found on the dark side of Remus. Although harmless to ROmuland or Remans, the bird is dangerous to small livestock. Because they only hunt on the dark side of Remus, their black coloring makes them particularly difficult to defend against.