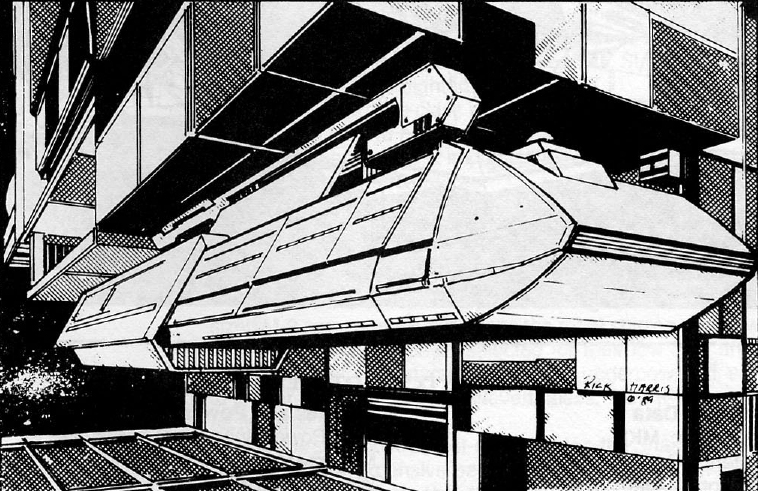 design by John A. Theisen
Art by Rick Harris

NOTES:
The New Lynn class passenger liner, entering service in 2271, was designed and manufactured by North Shore Starship Constructors, LLC., a small but rapidly expanding shipbuilding firm headquartered on Alpha Centauri. Every aspect of this ship’s design has been devoted to providing the greatest possible benefits to passengers at the lowest possible fee. The L-12 computer, FIA-2 impulse propulsion unit, and navigational shield generators were selected for their overall reliability, economy, and cost efficiency. Moreover, this design’s thrifty nature permits ship captains greater flexibility in cargo speculation and a less formidable financial break-even point. However, this cost efficiency has drawn occasional grumblings from crewmembers, some of whom have stated that “the shields wouldn’t stop an Orion hand phaser.”

More significantly, the FWl-1 warp engine mounted above the hull’s centerline has been a source of infrequent but erratic problems, usually involving the starship’s matter/anti­matter balance.
While travelling on impulse power just before the warp engine is engaged, the calculated intermix formula occasionally has failed to fuel the engine correctly. This requires the Engineering Officer to shut the warp engine off completely and recalculate it from scratch (an annoying but harmless delay of up to several hours), or proceed without delay and risk an un­controlled engine implosion (or worse, a wormhole effect). Some have claimed that this flaw may explain the loss of at least one New Lynn class liner, particularly since the SS Porirua reported having had intermittent engine shutdowns shortly before its disappearance.

Oddly, this intermix problem does not occur regularly, and it has not been reported on other starship classes using the FWI-1 engine.

As a result, engineers now believe it is some type of circuitry problem unique to these liners. Starships of this class may be recalled for appropriate modifications as soon as the situation can be corrected.

But most New Lynn passengers are unaware of these problems, unless their own schedules become adversely affected.

Despite the relative austerity of major shipboard systems, the passenger staterooms and lounges are extraordinarily comfortable (even if a bit on the small side). Many have described the shipboard facilities as “cozy,” generally with an endearing ticket price to match. All-in-all, this class is ideally suited for moderately fast shuttle operations in areas of Federations space with high stellar system density. In fact, this ship’s popularity as a private charter vessel is just beginning to grow.

The ship’s hull, nearly rectangular in shape, is divided into six decks, with passenger staterooms on decks four and five (assuming that the uppermost deck is one), and the cargo area on deck six. The cargo area is a particular innovation of this liner. Individually sealed 0.5 SCU storage lockers are assigned to each passenger stateroom, and the guests are permitted unlimited access to their own cargo while in transit.

Of the 65 New Lynn class passenger liners constructed as of 2287, 61 remain in commercial or private service, 1 has been destroyed, and 3 are listed as missing. This class, manufactured and constructed at Sol IV, is still being produced at an average rate of 10 ships per year. There is also a report that Star Fleet Command is now interested in this design and may place an order within the next standard year.