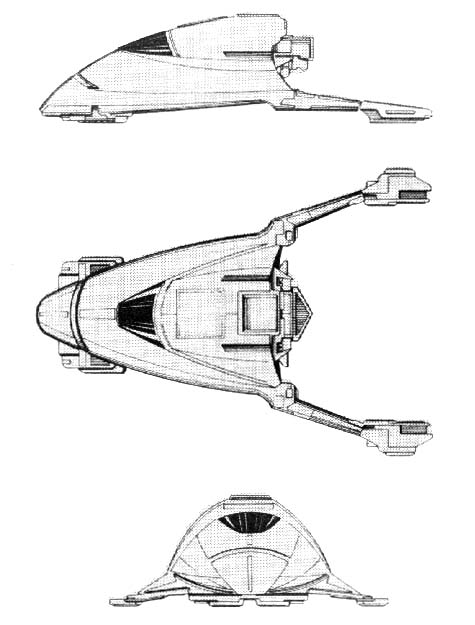 NOTES:
Built to supplement the P-2s, the P-3s are used in groups of two or three in the more hostile areas of the Empire. Unlike the P-2s, however, the P-3s have no warp drive capability, but rely on a powerful impulse engine for their maneuver power. These ships are transferred from one system to another by a special carrier designed to carry up to nine at one time, which can be transported freely.

The Type-1 was found to be under gunned. This fault was corrected by adding slightly more powerful weapons in the Type-3. By Stardate 2/0612, all Type-1s and Type-2s in service were refitted with the newer weapons. By 2287, it was felt that the Type-3 could be further upgraded and the Type-4 was lunched in early 2288. The Type-5 was launched with a computer update in 2292, but did little to improve the combat capability of the P-3. The Final production variant – the Type-6, was lunched in 2303. It was the most radical change to the sub-light vessel in 50 years. The addition of a powerful torpedo system allowed the P-3 to remain active and effective will into the 2340’s.

The class is reportedly named for the Caladan Mountains of Remus, which are reputed to protect the city-states on their leeward sides from the constant and violent winds and also from marauders.