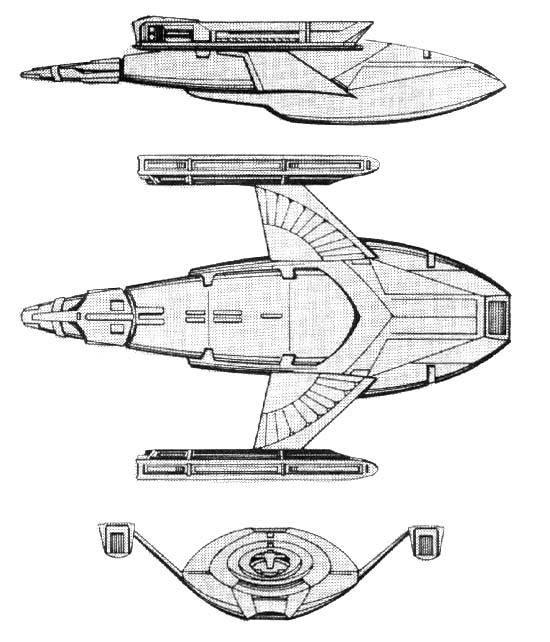 NOTES:
Though designed to be used as a freighter, the I-7 can be converted into a troop transport on short notice, a part of the contract for service that has proven its worth. The ships are capable of carrying 480,000 metric tons of cargo or up to 3,200 troops. When the I-7 entered service approximately Stardate 2/13, they were assigned to the Military and Outpost Divisions, which made them easily accessible for conversion and put them under the command of the divisions that would require their services.

When the I-7 is used to carry troops, half of the cargo transporters are removed and replaced with 16 transporter stations capable of beaming 14 troopers per station. This allows 242 soldiers to be beamed to the surface every two minutes or the entire contingent of troops in less than 30 minutes. The remaining cargo transporters are used to beam down support equipment such as armored vehicles and artillery.

Of the approximately 90 built, nearly all are in active service. Current production rates on this vessel are estimated at eight per year.

The I-7 is not as widely used by the civil sector as are the other freight carriers of the Star Navy, likely because of the recall/refit clause reported to be required of all civilian purchasers. It is estimated that only 60 of these vessels are being used by private industry. Several are known to be operating in the Triangle.

The class is named for Vespin, a trade city in the Kalabestasl system.