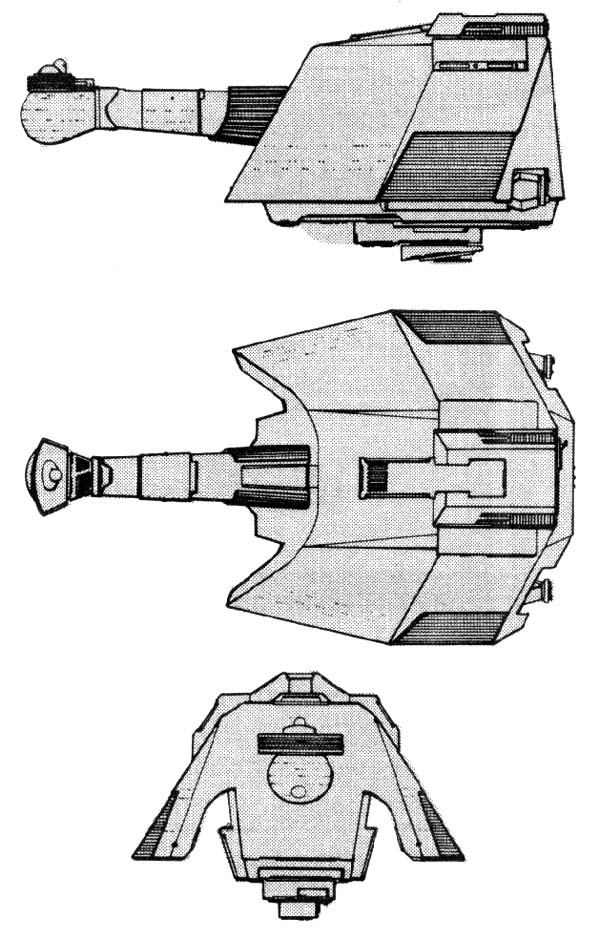 NOTES:
The L-13 was the first attempt by Klingon ship designers to construct a heavy firepower battleship. After the completion of four ships, with four more in various stages of production, it was discovered that the vessels were no better in combat than some of the existing cruisers and frigates.

On Stardate 6676.9, an L-13A escorted by six D-11D’s attacked a group of Romulan ships near the Triangle. The Romulan force consisted of a Type-1 V-6 (Gallant Wing) class cruiser and three Type 7 T-2 (Death Talon) class destroyers. The Klingon commander, confident with his new ship, pressed the attack, only to find the Romulan cruiser his equal. After several exchanges of fire, the Klingon force had suffered the loss of 3 D-11’s, and serious damage had been done to the L-13. The Romulan cruiser had received moderate damage and one destroyer had been eliminated. The Klingons, fearing the loss of the battleship, began to withdraw from the battle. The Romulan commander decided to counterattack the retreating Klingons. The huge battleship still had plenty of fight left and was able to disable another of the Romulan destroyers. At this point, both sides disengaged; the Klingon ships withdrew to Klingon space while the Romulan commander returned to the area of the battle and salvaged what he could of his ships, taking in tow a disabled D-11. This skirmish proved to the Klingon Imperial Command that the L-13 needed improvements. The B model was not successful during its tests and was therefore never put into production.

In late 2270, the first successful modification was commissioned, with the L-13C models superior in every respect. Their warp capabilities increased by 50%, allowing them to travel at Warp 6. The KWE-2 engines gave them more efficient power for maneuvering and additional power for the weapons systems. The old KD-7 and KD-10 disruptors were replaced with the more effective KD-9, and the shields were improved and superstructure strengthened.

As the Federation and Romulans continued to upgrade their vessels, the Klingons did likewise. The L-13D, introduced in early 2280 with the commissioning of two vessels, was equipped with the KWE-3 warp engine and KIF-2 impulse drive, highly efficient engines that gave the ships even more power for maneuvering and weapons. Though the disruptor arrangement remained the same as the C model, the KP-6 torpedo had been added in both the fore and aft positions. This model also mounts more efficient shields and has an increased superstructure strength. The KCD cloaking device was reported to have been mounted on two of the four ships produced to date.

In 2288, fearful of the Federation’s Excelsior class, designers again updated the L-13. More powerful aft weapons and additional armor plating was installed in the hopes of making the platform more effective. The improvements were useful again Romulan and pirates vessels who often tried to exploit the vulnerable aft sections of target vessels. The L-13E remained in production until the Praxis disaster.

As with so many vessel classes in the Empire, the Praxis disaster did not bode well for the L-13. Although plans for 30 of these battleships had been in the works, the disaster meant that only the 6 vessels in various stages of construction would be completed. by 2300, the designs age was apparent, and the massive vessels were relegated to more reserve duties. In 2305 the decision was made to mothball 6 of the oldest hulls still in service. The L-13’s large crew and extensive resource needs kept many close to their home ports for months at a time.

Threats from the Cardassians meant that the L-13 was again put into a front line combat role. By 2315, the Empire had expanded well into open territory, clashing with the Cardassians often, and a new F model was soon put into action. The L-13F continued to operate as a fleet focal point for a further 30 years before the final variant was comissioned.

While the L-13F continued to serve until 2345, designers were able to incorporate the latest combat systems into the space frame. The G model became the final variant before the L-13 was retired after the Dominion War.

Of the 32 L-13s built, one A model is missing and presumed lost. 1 B, 2 E and 5 F models have been destroyed. 1 B, 1 C, 1 E and 2 F have been scrapped. 1 G was destroyed during the Dominion Wars. 9 Gs are in reserve fleets. 8 Fs have been sold to ranking families in the Empire. The facilities for constructing the L- 13 were located at Taamar and were estimated to produce up to two per year at peak production.

The class, named for the Klingon “k’el ri’anda”, translates to “the dangerous fat man”. The brunt of many jokes about being more dangerous to their Klingon crews than the enemy, the L-13 is known to Star Fleet officers as ‘the fat man” and as “the turtle”.