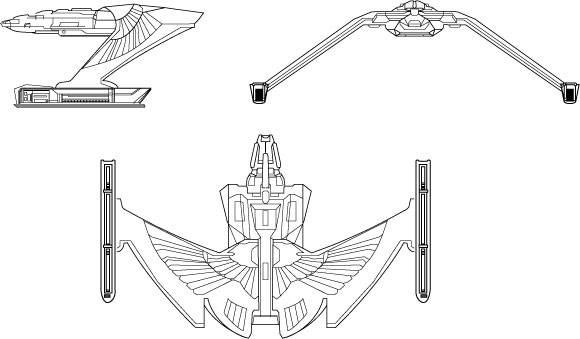 NOTES:
As the Romulan Empire continued to struggle for new resources through out the quadrant, many within the Empire felt that much of the forward thinking Imperialists of old had long since lost their grip on the military and the ability to defend the Empire. By the Mid-2270’s the Federation had expanded it’s fleet with powerful and dangerous vessels, while the Klingons continued to surge in overall numbers. Boarder skirmishes with Klingon forces were becoming less and less successful, and by 2280, the Romulan Empire had not had a significant military technological innovation in nearly 20 years. Although the Empire continued to grow, less and less resources were discovered, and many began to wonder if the Empire could continue.

Into this nervous time was born the V-19 Cruisers, intended to directly challenge the supremacy of the Federations Constitution/Enterprise class. Even outside the Federation, the reputation of these Heavy Cruisers was well documented. The Romulans began production of the new cruiser in 2282, but would not launch the prototype until 2284. During it’s two years of development, the Romulan Empire finally experienced a surge of technological innovation that would keep it on par with the other major governments. The V-19, when finally launched, incorporated many of the latest systems that the Romulans had to offer. The Type-1 actually used the RWF-2 drive system; older and more reliable than the newer RWG systems, the RWF-2 was also less expensive and time-consuming to construct. This allowed the V-19 to be built more rapidly than other Romulan Cruisers, including the highly sought V-30 heavy cruiser. The Type-1 V-19 was nearly a match for it’s larger cousin, and was heavily armed with the new RB-12 as it’s main attack weapons. To supplement the primary weapons, six RB-10’s were also mounted in typical overlapping fashion so common on Romulan vessels. The V-19 also mounted two RP-4 photon torpedo tubes, giving the cruiser greater firepower than most similarly sized vessels. The Type-1 served well along both hostile boarders and along the rim ward expanse, where they helped push the boarders of the Romulan Empire faster than any previous vessel. But, like so many other designs, the V-19 was not as successful as originally hoped for.

By 2292, the Romulans had realized that the V-19 simply could not compete against the powerful Federation heavy cruisers and were too often outnumbered by Klingon forces. With the Klingons massing along the Triangle and Romulan boarders, fate delivered the time the Romulans needed to upgrade the V-19 when the Klingon’s lost Praxis. The massive power shift and scrapping of Klingon vessel was a god-send to the Romulans, who purchased dozens of Klingon vessels at surprisingly reasonable prices. The Romulans also perfected the RB-13 heavy disruptor, giving the Empire the edge it needed. Although lacking in high-powered quadtronic shield systems, the Empire did have the RSR, more powerful than any other shield mounted on a similarly sized vessel, which propelled the V-19 Type-2 back into the limelight. The Type-2 incorporated the more powerful RWF-3 which gave the V-19 a superior power curve over Klingon vessels and the ability to engage most Federation medium Frigates and Cruisers. Although not as powerful as a Federation Heavy Cruiser, the V-19 could be produced much more rapidly, and were able to be fielded in squadrons of two or more. The V-19 Type-2 would remain in service until 2318, when an unlikely source prompted the upgrade of the Heavy Cruisers.

In early 2318, two V-19’s were lost near the Gorn boarder to unknown forces. Initial reports indicated that both V-19’s had been destroyed by a single Gorn cruisers. It was not until much later that it was discovered that the V-19’s had actually engaged five cruisers of the same design. The initial confusion prompted a reevaluation of the V-19’s operating along the Gorn boarder. The Type-4 was launched less than a year latter and boosted the combat capability of the V-19 to dangerous levels. Although construction time nearly doubled, the V-19 Type-4 mounted the new RB-15 disruptors as well as the efficient RSS quadtronic shield system. The new weapon systems and enlarged impulse drive allowed the V-19 to continue its mission easily and efficiently, and the popular cruiser remain in production to this day.

The V-19 is produced exclusively at Carraya Imperial Construction Dry-docks and the Remus Aviary Consortium Yards at a combined rate of 3 per year. Of the 140 so far constructed, 118 remain in active service, including 24 newly built V-19 and 94 converted Type-1’s and 2’s; one Type-2 is listed as missing; 10 are reported destroyed, including 1 Type-1, 5 Type-2’s and 4 Type-4’s; 1 Type-1, 3 Type-2’s and 2 Type-4’s have been scrapped; 5 Type-4’s are currently used as training command vessels.