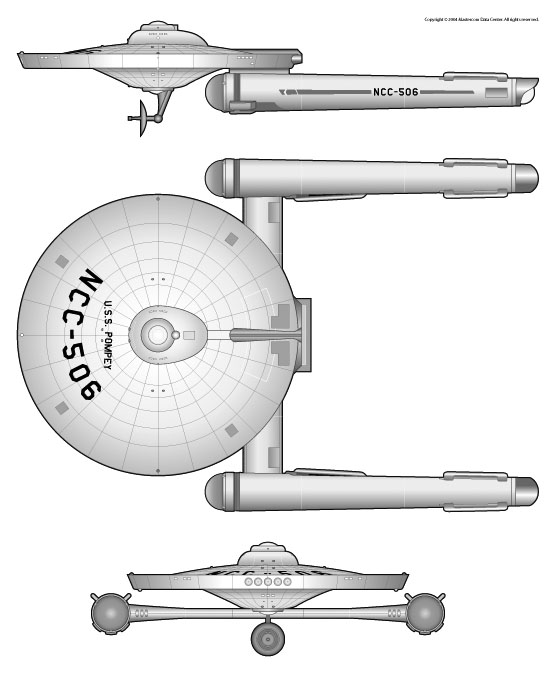 NOTES:
The Pompeii class was another in a long list of vessels that were proposed shortly after the Kingons began reducing their forces along the Federation boarder in the early 2240. Even as more scientific and research cruisers were fielded, many worried that the sudden decrease in Klingon activity signaled a possible prelude to large scale war. Probes and scouts all indicated that the Klingons had actually increased their starship production. The Pompeii was originally fielded to support the Cassard class, bringing both heavy weapons and diverse beam weapons to bare in conflict situations.

But the Pompeii was not quite the unqualified success that many had hoped for. The Mk I was considered adequately armed when compared to other vessels of the day, but field commanders felt the vessel’s main weapons were underpowered for its mission. None the less, four Mk I’s were commissioned by the end of 2243 and would see action in August of 2244 during the Battle of Donatu V. When matched singly against their Klingon counterparts, the Mk I’s proved adequate. But all four required support once they were outnumbered, and by battles end, two had been seriously damaged. Star Fleet continued with the construction program until 2245, when new equipment was proposed for the Pompeii class. With continued Klingon aggression within Federation space, procurement decided that further design should be upgraded.

The Mk II was commissioned in 2246 with stronger shields, heavier weapons and more hull reinforcement. Most notable was the addition of two heavy accelerator cannons forward. To accommodate the new weapons, one cargo bay was redesigned, reducing the longevity of the Pompeii. But with most destroyed now home ported at established bases, the two year range was though to be no great hindrance. Surprisingly, the Mk I’s were not scheduled for upgrade until 2252, shortly before the outbreak of the Four-Years War. By wars start, though, Star Fleet scrambled to complete new hulls and upgrade older vessels. This mad scramble would prove somewhat incontinent for front line commanders. By 2254, no two Pompeii’s were completely similar. The class utilized six different version of the M-1 computer, including systems by Shaktir Tripel, Interstellar Business Machines, Farranti Mnemonics and a host of other smaller computer manufacturers. While these differences did not affect overall combat performance, repair and refit after combat proved difficult at best.

By wars end, procurement had approved a much improved and standardized Mk III. Refit with the new phaser and photon torpedo weaponry, the Mk III was quickly relegated to patrol duty in support of larger frigates and combat cruisers. The Mk III continued in this role until 2269. Although several firms had petitioned to further upgrade the Pompeii class, many knew that the vessels would require such significant refit that new-build vessels would proved cost effective. By 2272, most remaining Pompeii’s had been relegated to convoy escort and were soon retired from active service.

The Pompeii class were built at the Salazzar and Tellar shipyards at a general rate of 4 to 6 per year. Of the 82 built, 14 have been destroyed, including one Mk II, 11 Mk II’s and one Mk III. 27 are currently on Reserve Fleet status, including 9 converted Mk II’s and 18 new built Mk III’s. One Mk I, one Mk II and two Mk III’s are listed as missing. 28 have been scrapped over the years, many as automated targets at test firing ranges across the Federation. Nine have been disarmed and sold, including one Mk I, four Mk II’s and four Mk III’s. A purchase order for 10 reserve fleet Pompeii’s has been placed by the government of New New Aberdeen. Final approval is expected by 2289 or 2290.