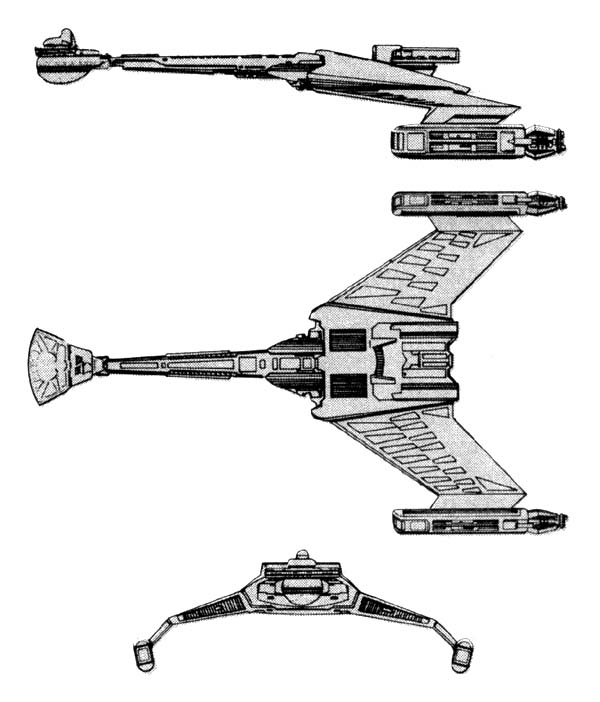 NOTES:
The D-4, predecessor to the famed D-7 class, pioneered the command pod forward design that has become the standard for most modern Klingon warships. The class was introduced on Stardate 1/8407 with the commissioning of eight ships, which had been produced at the alarming rate of one per month at facilities operating as if under wartime production orders. This was a clear signal that the Klingons were either preparing for a war with either Romulan or Federation forces or were involved in a conflict along an unknown border. Only recently, because of intelligence gained from Operation Dixie, has it come to light that the Klingons were in fact being attacked by an unknown enemy along their coreward border. During this conflict the D-4 saw extensive action and went through several different modifications, many of which were never brought into production. This conflict ended somewhere around Stardate 1/8610, slowing further development.

On Stardate 1/9108, the D-4E was tested and proclaimed successful. Production was converted over to this newer model, and, by Stardate 1/9203, the first vessels were commissioned. By 1/9501, the D-4A was no longer being produced, and most of the D-4A’s in service were being converted to D- 4E’s, which mounted a more powerful impulse drive system.

The major improvement was the replacement of the KD-2 by the KD-3, with a range of 120,000 km, extending the offensive capability of the D-4 by 20,000 km. The shielding system was also upgraded, with the new KSE system giving the ship 65% more protection from incoming fire. The superstructure was strengthened to handle the uprated equipment. Even though the D-4 proved to be valuable in combat, witnessed by its class name of “Predator” from the Klingon “d’ama”, its days were numbered. The D-7, with its higher firepower and more powerful engines, would replace it by Stardate 2/0806.