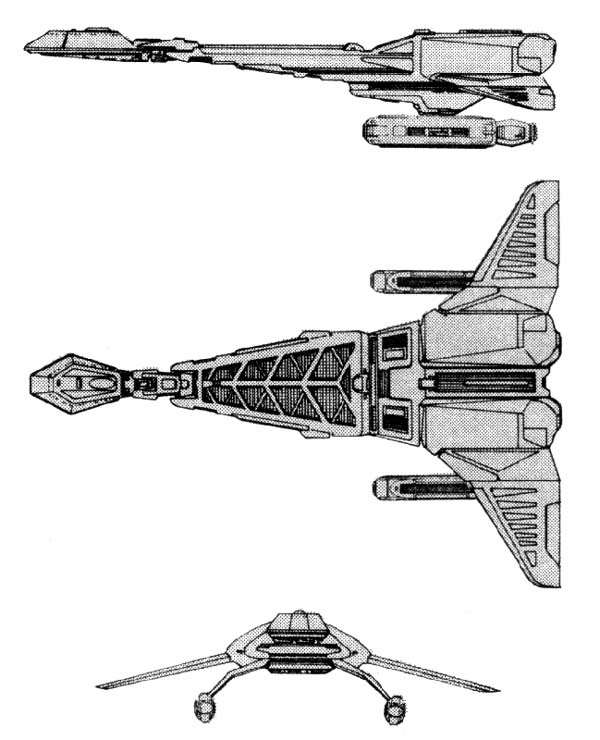 NOTES:
So similar in appearance and function to it’s heavier single-engine cousin the “Stinger”, the D-41 was for many year mistaken for the more popular D-14. The design lineage of the two ships was developed and implemented at exactly the same time, with ship production numbers paralleling each other for years. The ship was designed by house Drexa, with one of the most unusual rivalries in the Empire fueling the production. The initial design was proposed by the youngest brother and eldest sister of the house – twins who had both become successful ship designers in their own right. The brother would go on to support the single engine D-14 while the sister insisted on the twin engine D-41 design.

The D-41a proved to be a slightly more efficient design, with a 10% increased power curve. The D-41 also used the heavier KD-7 disruptors, increasing overall weapon power by nearly 16%. However, while the KD-7 was less expensive to produce and easier to maintain, it’s effective range was shorter than it’s rivals KD-6s. The D-41 was also fitted with a cloaking device at the outset – a design feature later added to the D-14. The D-41 also required a larger crew to maintain the twin engines, making them somewhat less popular than the D-14. None the less, the two rival vessels would continue to be produced in tandem for the next 70 years.

The D-41b, launched in 2279, was the same expansion of the torpedo bay as the D-14b. While initial designs called for an expansion of the shuttle-bay and passenger accommodations, these changes were not incorporated. It was also discovered that the single engine design was far harder to detect while cloaked. The effectiveness of both designs had been proven time and again, with both designs continuing production during the 2280’s.

The D-41c model, along with the D-14c were presented to the high council for approval less than 24 hours before the destruction of Praxis. Only the effectiveness of the designs (and influence of the Drexa line at the time) saved both destroyers from being cancelled. Production of the D-41 plummeted to just 2 new builds per year, with emphasis on refitting older ships.

The D-41d would again parallel it’s sister design, with an increase in torpedo firepower and an improvement to the main shield system. The D-41e would use the exact same firepower as the D-14e, changing the power plant to the KWH-2 warp drive. Because of it’s slightly higher cruising speed, the D-41 was utilized more often during the Son’a conflict, while the stealth of the D-14 found that design used more often against the Breen during the final years of that conflict.

Both would be used extensively during the Dominion conflict, with the D-41e being on of the few direct opponents to the Jem’Hadar attack fighter.

The D-41 is named for the planet Nogunda, the same world that the ‘Stinger’ was named from.