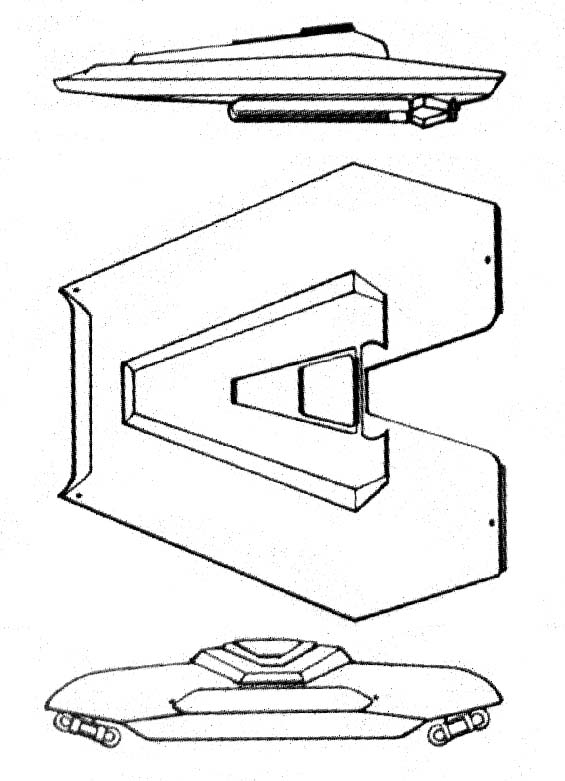 NOTES:
A radical departure from usual Klingon designs, the new K–26 has been encountered only infrequently, leading Starfleet Intelligence to believe that it is not deployed in large numbers. Rumors and intercepted messages lead to the conclusion that the Klingon High Command was not happy with the performance of the K-26 in field trials. Thus, it was never extensively produced or deployed.

The K-26A, launched in 2253, was powerful, but did not concentrate its firepower. With four KD-6, the A model had firepower equal to most cruisers of the day. The inability to concentrate more than two of the main weapons on a single target did reduce the overall effectiveness of the K-26. Six years later, the K-26B was launched, doubling the overall number of disruptors. However, the use of the KD-5s gave the vessel little increase in overall combat effectiveness.

None the less, the K-26 was efficient enough to warrant a third model, the K-26C. The C model added disruptors to make the K-26C a surprisingly effective combat craft. However, the internal layout precluded the addition of torpedoes, relegating the K-26 to it’s escort/destroyer roll. Despite it proven capabilities and future potential, the K-26 program was ended in early 2273.

A total of 85 were built over the years at the Qronos facilities. 5 K-26As, 6 B’s and 4 C’s are listed as missing, nearly off of which are believed to be in the IKS fleet. 3 A’s 2 Bs and 2 Cs have been destroyed. 1 B and 2 Cs have been scrapped. 3 have been captured, including 1 B and 1 C by the Romulans and 1 C by interests in the Triangle. 10 Cs were sold (5 to the Naussicans and 5 to the Orions), 30 As were traded to the Romulans. 5 Cs were traded to various interests in the Triangle. 6 As and 5 Cs are in service to Ranking Families in the Empire. 5 B’s were converted to C models.