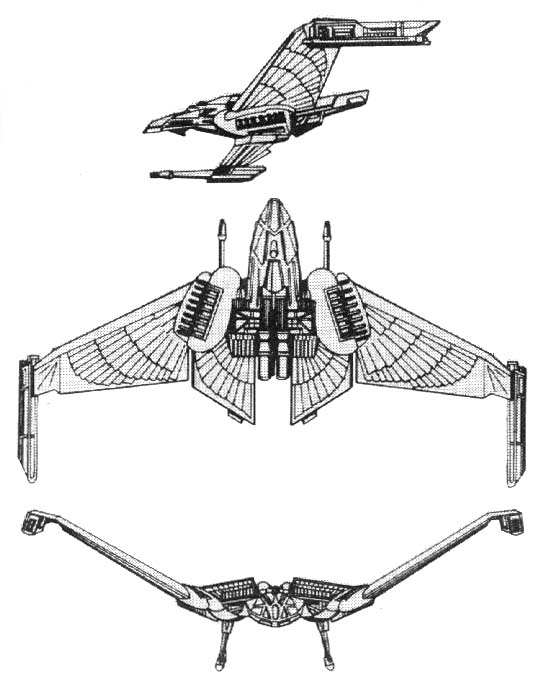 NOTES:
The V-30 is the most powerful of all Romulan warships. Exemplifying the new-style design, the cruiser looks like a bird and has variable wing positions.

Introduced about 2271, the Type-1 mounted eight disruptors arranged to give covering fire in all directions. The powerful plasma weapon, the RPL-3, coupled with the cloaking device, allowed the V-30 Type-1 to use standard Romulan tactics and deliver a devastating first strike. The Type-2, introduced some time in 2276, mounted the new RP-3 photon torpedoes both fore and aft.

V-30’s were used as flagships or focal points of a fleet, several of which had three or four of these vessels assigned to them. The V-30 was originally deployed along the Neutral Zone and areas bordering the Triangle as a deterrent to possible incursions into Empire space. Furthermore, these ships were often used for ‘shadowing’ missions along the Neutral Zone, following a course parallel to and just outside sensors range of any Federation ships that approach the Zone. This made exact identification of the vessel impossible, and had added to the confusion concerning the exact disposition of these cruisers.

The Type-1 and Type-2, like the V-27s, never operated alone. On every occasion monitored, the V-30 had an escort of destroyers and/or other cruisers. There were no recorded incidents of combat between these ships and Federation vessels; however, most experts agreed that an encounter between a V-30 and an Enterprise Class cruiser would most likely have been a fairly even match of firepower. Unsubstantiated reports of Klingon encounters with these vessels were common, with the V-30s reportedly being victorious in all cases.

The Type-3, believed to have been fielded in 2288, was a direct answer to the Klingon’s massive fleet refit of the late 2280’s. While Romulan intelligence was well aware that the Klingons were once again turning their main focus to the Federation, it was well believed that the Empire would test a number of it’s combat ships against the Romulans. They Type-3 upgraded the main weapon systems as well as the primary shield system, making it a popular vessel along the Klingon-Romulan boarder and well able to defend it’s self against Klingon incursion. The Type-3 was also the first V-30 model to see unescorted operations, with several noted V-30’s sent on hunter-killer missions as well as detailed exploration operations.

The Type-4 was launched in 2293 with the introduction of dual main torpedo weapon systems. The dual plasma bolt systems reduced internal volume significantly, but gave the Type-4 a tremendous punch at close range. Increasing the class’ popularity, the Type-4 would see combat against Gorn, Klingon and Federation ships, often forcing a draw if not a victory for the Romulans.

The next variant, the Type-5, was also the last mainline production model of the V-30. With several other classes being built based on the V-30 hull, the Type-5 saw the increase in main torpedo compliment as well as the first change to the primary power plant in nearly 30 years. The RIG-1 gave the vessel more power and allowed for better combat operations. The Type-5 remained in production until 2325.

When the attack on Kitomer in 2346 had the opposite hoped-for effect, the Empire realized that the Klingons were no-longer looking to dissolve their relations with the Federation, but instead greatly strengthened their two enemies resolve. Many in the Senate and in the Naval halls of power knew that the Klingons would turn their full attention to the Empire, despite conflicts with the Cardassians, Kinshaya and others. While the Warbird class was the great hope for the Empire, many knew that older vessels would need to be greatly improved to bolster the front-line fleets. The V-30 Type-6 was one of the first to be fully updated.

The Type-6 saw an increase in the main computer as well as an increase in overall firepower. The Plasma Bolt was removed in favor of the longer distance striking power of Photon Torpedoes. The Type-6 also fielded a more powerful main deflector system.

The final variant fielded, the Type-7, significantly changed the characteristics of the overall combat platform. Designers replaced the aged but well established RWG power system with the newer but more powerful RWJ system. Coupled with the larger RIL-1 impulse drive, the overall ships power was increased by 35%. The Type-7 also increased the main disruptors and significantly increased the vessels shield. While the Type-7 was significantly more powerful than it’s predecessors, it would also prove to be one of the most battle tested of all the variants. Nearly 200 V-30 Type-7’s saw action during the Dominion War. Since the end of the war, the V-30 has returned to it’s previous duties as a boarder patrol cruiser.

Of the approximately 290 built, 200 remain on active duty assigned to border areas. Intelligence reports that the Winged Defenders will soon be phased out in favor of newer vessels. One Type-7 is listed as missing and is believed to have been destroyed during the Dominion War. Reports indicate that 25 to 26 V-30’s have been destroyed, with intelligence confirming that 3 Type-3’s, 2 Type-4’s, 2 Type-6’s and 18 Type-7’s among the known losses. A 19th Type-7 may have also been destroyed. 32 are believed to have been scrapped, including 1 Type-3, 1 Type-5, 2 Type-6’s and 28 Type-7’s, nearly all of which were damaged during the Dominion War. It is believed that 1 Type-7 was captured during the war. 25 Type-3’s and 5 Type-4’s are known to be in reserve fleets. Production of the V-30 has fluctuated between 5 and 9 hulls, with the most standard production number believed to be 7 per year. The class is named from the Romulan vas’deletham (winged defender), in reference to a small, flying creature native to Remus. These small birds have been known to fight to the death to defend their nest, driving away even full-grown Romulans.