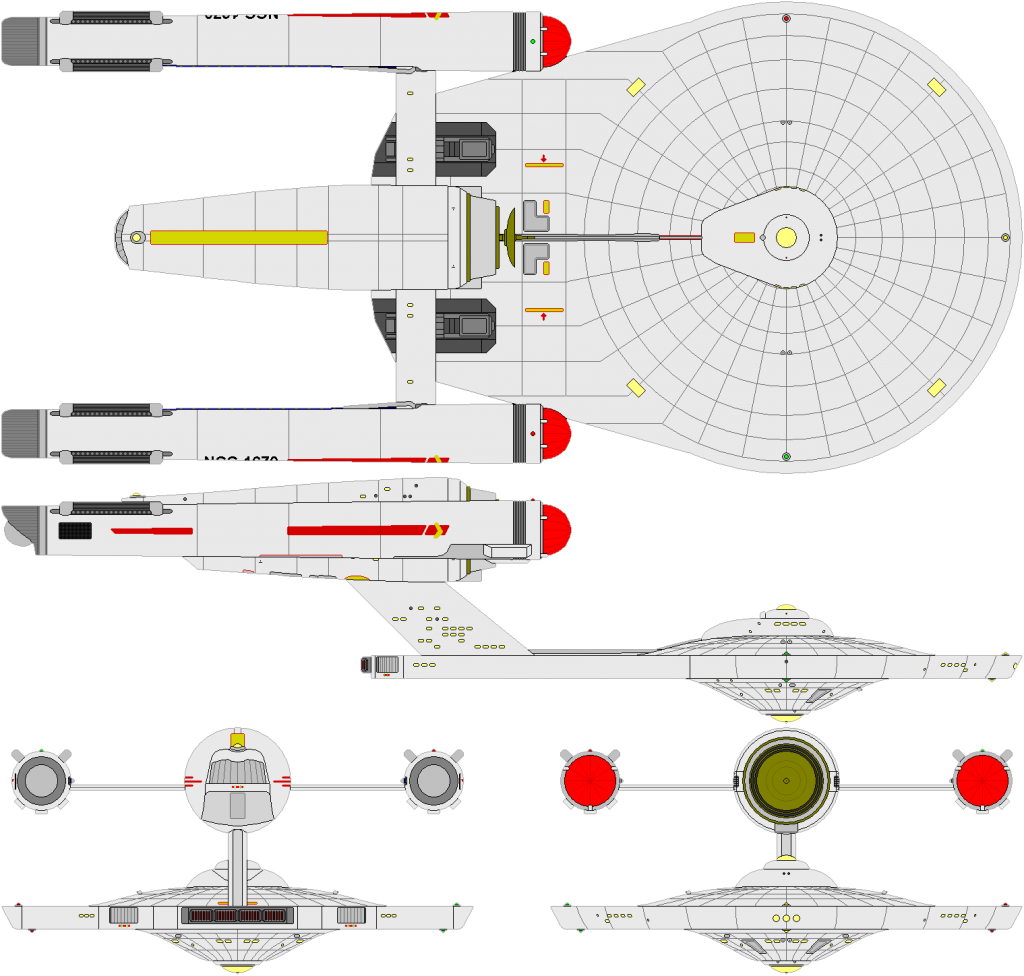 NOTES:
The Vagabond class of cruiser was designed to test out a number of concepts and ideas in long term front line use that had been learned from the Federation conflicts of the 2240’s and 2250’s. The first issue was to place the engines as far as practically viable from the underside sensor dome. During earlier conflicts, the main sensors on many Federation starships were required to incorporate computer programs to compensate for sensor “ghosting” while at high warp. The Vagabond, like a number of other designs, attempted to compensate by moving the largest distortion system of the ship – the Warp nacelles.

This move gave the designers the ability to enlarge the main hull to incorporate two additional shuttle bays. While the M-3 computer installed was large, it didn’t require additional sub-systems that other large front line cruisers required. The additional space was used to enlarge all three shuttle bays, making room for three shuttles in each location. The Mk I was also well armed, incorporating four FH-3 phasers, which were quickly becoming the standard main beam weapon of the Federation. However, designers decided to use the lighter FP-2 torpedo system. The lighter and smaller system meant the Vagabond could easily carry far more torpedo casings and probes than other similarly sized cruisers, but mean the primary hitting power of the torpedoes was reduced. Non the less, the Vagabond was an immediate success, exploring and charting along both hostile and unexplored boarders.

In late 2264, as Klingon continued to pose a moderate threat across the quadrant, the decision was made to upgrade the Vagabond, along with a wide range of vessels. The Mk II was launched in late 2265.

The Mk II enlarged the main computer, forcing several subsystems to be moved and reducing the storage space for shuttles. However, the Mk II gained a much more powerful torpedo system as well as greatly more efficient shield system. As was inevitable, these systems were tested when the Klingons launched a large scale fleet assault during the Organian conflict.

Both the Mk I and Mk II saw action in the week long conflict, with both models seeing some success. The Mk II was clearly the superior class, with it’s greater overall firepower. Surprisingly, it was post-combat action that showed some that the loss of the additional shuttles might prove problematic. After the K’tom’ro engagement, rescue operations were slow due to the reduced number of shuttle available. While the USS Surya was able to engage a reinforcing cruiser far from the field of battle, had the Klingon ship arrived, it is probable that the wounded and trapped Federation crews might not have been rescued.

The Vagabond proved successful enough that it would eventually be refit to the Vagabond II class. Of the 13 built, 6 Mk I’s were converted to Mk II’s. 1 Mk I was scrapped after being damaged in combat. The Vagabond was built at the Sol III and Sol IV shipyards.