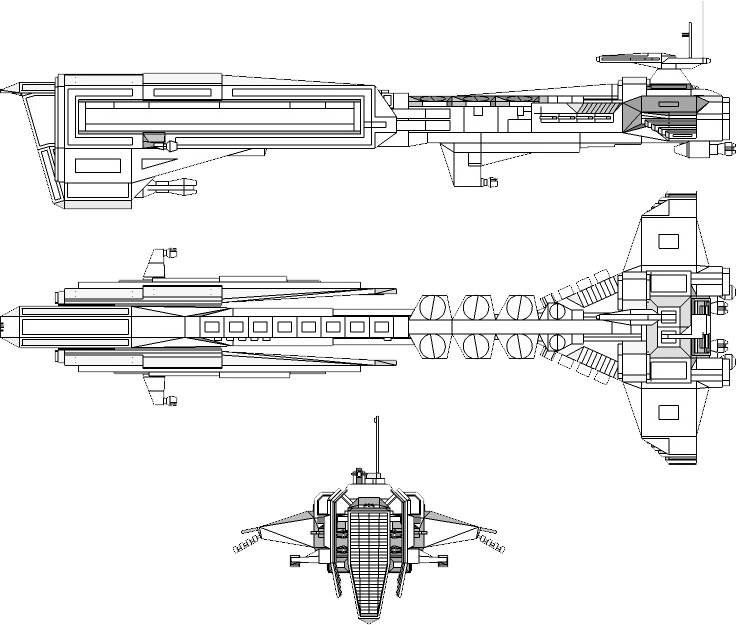 NOTES:
The Battlenaught was designed a direct competitor to the popular Guardian class, and has since proven itself as nearly useless in the major combat arena. Like most Orion combat vessel commercially built, the Battlenaught was built more for show than for combat. Larger than its competition, the Battlenaught mounted nine disruptors and four torpedoes. However, the power and range of these weapons were so poor as to be negligible. None the less, buyers lined up to purchase nearly a dozen of these large combat platforms, intending to refit them with far heavier weapons as soon as possible.

Despite it’s paltry ability as a destroyer, the Battlenaught was very roomy and comfortable. Each crew member had their own cabin and a number of other crew comforts were included. The sales design and strategy worked well for Orion colonial governors who wished to show off the menacing looking vessel. Only one of the 17 originally built A-1 models ever saw combat, with an attempted defense of the Orion colony of Vab. During a Klingon retaliatory strike in 2276, one Battlenaught was easily destroyed by a Klingon destroyer after it’s over zealous captain challenged the imperial vessel.

In 2277, the decision was made to actually build a successful combat design, leading to the A-2, a far more capable military vessel. Four A-2 models were contracted by the Matieve Colonial Association, with delivery in late 2278. Two had been purchased by the loyalists and two by the rebels. None of the four A-2’s purchased ever fought against each other, with all four being destroyed over the years. Their combat record stood, though, and a number of colonial governors requested upgrades to the previously purchased Battlenaught.

The A-2 is distinguished primarily by it’s much heavier main disruptors, four OD-5’s mounted in well covered firing arcs. Coupled with the more potent main power plant, the A-2 suffers only from a lack of shielding, rarely addressed in most Orion design. Of the 16 A-1’s known to still be active, 11 have been refit to the A-2 variant. Three more are believed to have had other modifications, while two have been sold in the Triangle. Contracts for 6 more A-2 models are currently in the works, with four being used in the Orion colonies, and two being slated for governments in the Triangle.