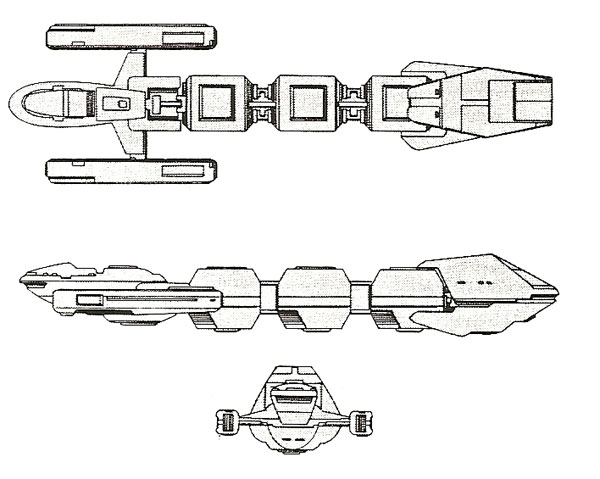 NOTES:
The Monon class of ore freighter was first developed to transport large quantities of ship-building ore from the Tiln and Volgas system to the more lucrative shipyards of Rigel. Simple to build and operate, the Monon class could completely strip mine a moderately sized asteroid and be on it’s way to the processing plants of Rigel in less than a month. On-board processing systems allowed the basic refinement of over 2,000 tons of ore per day. Several Monon’s also had more specialized refinement systems installed that allowed nearly 100 tons of ore to be fully smelted and prepared for final processing per day.
Sales of the A-1 Monon we staggering, with orders from both Orion and non-Orion firms at a rate of nearly 20 per month. The A-1 model was surprisingly comfortable for both fleet crews and the large processing and mining crew of 30. With it’s 3 major storage facilities on board, the A-1 model could easily turn a profit on nearly every cargo run. From the start, the Monon was armed to discourage pirates and other raiders. Also installed was the dual transducer shield system that gave the freighter good protection should the need arise. This meant that companies need only assign two to three escort vessels to guard convoys of Monons returning to base.
The A-1’s under-gunned nature did prove dangerous, though, and many pirate raiders quickly learned to deal with the escorts and stay out of range of massed weapons fire. When orders from the Triangle jumped 40%, designers quickly installed the longer ranged OD-2 system. Still inexpensive enough to turn a profit, this design required the loss of some cargo space. Surprisingly, this change improved the basic warp field dynamics and increased emergency speed of the freighters when fully loaded. Although the more heavily aremd A-2 could not be registered within the Federation, several Andorian and Tellarite mining interests quickly purchased small squadrons of the light ore freighter. The Monon is now a common site near deep space mining systems and uninhabited planets.
Of the estimated 1000 A-1 and A-2 models built, 146 A-1’s and 162 A-2’s are still used directly by Orion companies both within the Triangle and Orion space. Sketchy records indicate that only 3 of these vessels have been reported lost, owing to their use near populated systems. A total of 9 A-1’s and 5 A-2’s have been destroyed over the years from a wide variety of disasters and attacks. Because of thier ease of repair, only 4 A-1’s and 1 A-2 are known to have been scrapped. 11 A-1s’ and 6 A-2’s are known to have been captured. A total of 428 A-1’s and 225 A-2’s have been sold to private and corporate interests through-out the Alpha and Beta quadrants. Production rights have passed between 4 different companies over the past 60 years. Currently, Orionco Shipbuilding holds the patent to the Monon and produces only 2 per years unless directly requested. Despite this low production schedule, demand remains high for the light freighter and nearly 15 are refurbished each year.