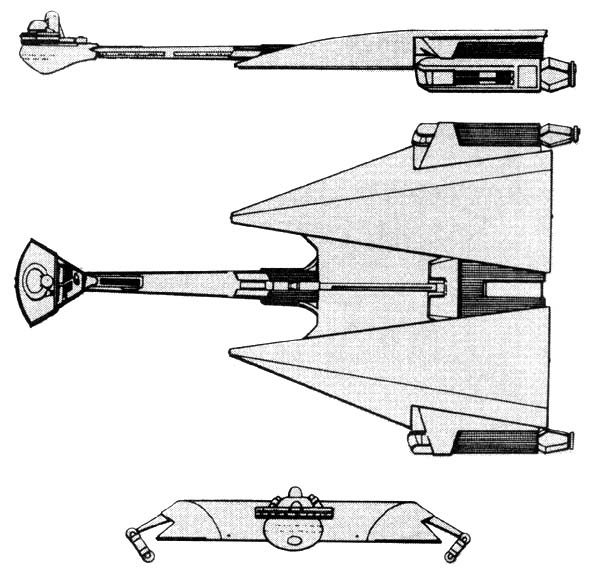 NOTES:
On Stardate 1/9606, the D-10 cruiser, the design of which was strongly influenced by the D-7, was commissioned into service. The Klingon Imperial Command hoped to counter Star Fleet’s Constitution class cruisers with this new vessel. The Four Years War was in its second year, and the Klingons had learned some of their lessons well. The D-10 featured a sturdy superstructure and the most effective shields the empire had to offer. The fore and aft-mounted disruptors were far superior to the Federation lasers, but were not as destructive as the Federation’s accelerator cannons.

The D-10 used the same command pod as the D-7, thus eliminating the need for additional production facilities. Like the D-7s pod, that of the D-10 is capable of being jettisoned and has similar sub-light maneuvering and life support capabilities. On Stardate 1/9802, Star Fleet captured a pod that had been jettisoned during the Battle of Kesse 16 months earlier; the crew were alive and as well as could be expected.

The main hull of the early D-10s contain the engineering section, shuttlebays, crew quarters, and assault troop hypothermia capsules; later models have no troop-carrying capabilities but instead have large research facilities. The warp engines are mounted on short pylons and are jettisonable. With the additional removal of the hypothermia capsules, the ship is capable of running on its impulse power alone for up to one year. The shuttle hangars are located on the upper wing surface of the main hull and are seen as two large doors. Directly aft of these doors are located the aft firing disruptors; aft-firing photon torpedo tubes are located at the stern of the vessel just below the impulse exhaust port.

The D-10 is the only Klingon warship whose class name honors a Klingon family line: the Riskadh line, which died with its founder, Kahless the Unforgettable, the greatest of all emperors. D-10s are manufactured at the Taamar, Gnuu Re’, Fonawl, Z’hai, and Mustaka facilities. The combined production rate is 14 D-10Ds, 12 D-10Gs, and 10 D-10Hs per year.

The D-10A first entered service on Stardate 1/9606, the first ships being rapidly sent into the Four Years War, where they proved to be the most powerful and feared ships in the Klingon Imperial Navy.

The model used a powerful warp engine, but mounted a fairly weak impulse system, the only real shortcoming of the vessel; the main engines allowed the ships to cruise at Warp 6, with emergency speeds as high as Warp 8. The weapons system consisted of six individually-mounted KD-6 disruptors and two aft-mounted KD-3s, giving the cruiser an offensive range capability 80,000 km greater than Federation warships.

With the Klingons having range superiority, if it had not been for the superior tactics of the Star Fleet commanders, the Four Years War might have turned out much differently. Star Fleet commanders were able to neutralize the range superiority in many cases, however. Klingon tactics were to send a D-10 with a small escort of three-to six destroyers into a system to secure it. Federation commanders would leave the system, making it appear unprotected; they would then return from several different directions and take the unsuspecting Klingons in flanking attacks. This tactic was not always successful, but it did deter the Klingons from mounting many attacks into the interior of Federation space. In the last months of the war, the Klingons faced the newly-developed phaser and photon torpedo, and the days of the D-10 as the “Queen Of Battle” were over.

Of the 444 D-10As built, 27 are in reserve fleets, 268 have been converted to D models and 14 to F models, 106 have been destroyed, 8 have been
captured (6 by Star Fleet and 2 by the Romulans), 6 are listed as missing, 7 have been scrapped, 6 have been sold to ranking families within the Empire, and 2 have been sold to private interests in the Triangle.

The first modification to the D-10 came on Stardate 2/1012, when the KIB-2 impulse drive system was replaced with the KID-2. Though the new D-10B was ordered into production, it never was produced in numbers because the KWE-2 warp drive system was brought into the navy’s inventory just as the new 8 models were ready for installation of their warp drives. These engines were installed, and, on Stardate 2/1201, the first D-10C was taken out for maneuver trials. On Stardate 6 2/1205, the completed ships were outfitted with the newly-created KD-9 disruptors, KP-4 photon torpedo, and the KSO shield systems, replacing the original equipment with upgraded systems. The D-10D entered service on Stardate 2/1307 with the simultaneous commissioning of 23 ships, the largest number of new ships to be commissioned at one time in known space.

The KWE-2 warp drive system allows the D-10D to achieve cruising speeds of Warp 7 and emergency speeds of Warp 8, even though it adds 30,000 mt to the overall weight. The KD-9 disruptors produce slightly less damage than the KD-6 models found on the D-10A, but they have an increased range of 20,000 km. The real increase in weapons power lies in the KP-4 torpedo, which is mounted fore and aft. The addition of so many new systems required an in- crease in the superstructure strength.

Of the 455 D-10Ds built, 389 remain in active service, 2 are used as training vessels, 47 have been destroyed, 2 have been captured by Star Fleet, 6 are listed as missing, 2 have been scrapped, 1 has been traded to the Romulans, 1 sold to the Orions, and 5 are in the service of ranking families of the Empire.

During the years 2/1002 to 2/1410, the Klingons created 5 new warp drive engines, 2 impulse drive systems, 5 new disrupter types, 4 photon torpedo types, 5 shield systems (of which 2 used a trinary power transformer),and 2 powerful computer systems. With all these new systems, the D-10F, incorporating many of them, was inevitable; it was commissioned on Stardate 2/1410. The KWE-3 engines produce 10% more power, and the KIE-1 impulse drive systems produce 50% more power than the systems installed on the D models, adding maneuverability. On Stardate 2/1312, the Klingons had acquired 14 Romulan plasma weapons of the RPL-1 type, and these weapons also were installed on the D-10F, instead of the photon torpedo. The KD-9 disruptors were replaced with KD-13s, increasing the range another 20,000 km, and the aft-firing KD-3s were replaced by 2 KD-9s and 2 KD-5s. The superstructure strength was increased by 16%, and the shields were upgraded.

After the completion of the D-10F models, the Klingons continued to use the Z’hai facility to construct D-10Gs, with two changes from the F model. The hypothermia capsules were removed and the area rebuilt as a laboratory facility, allowing the D-10G to act as a research cruiser in hostile areas where lightly-armed ships like the D-9 could be easily destroyed or damaged if attacked while alone. To further augment weaponry, fore and aft-firing photon torpedo bays were installed for the KP-4 torpedo.

On Stardate 2/2009, the D-10H was commissioned, the first model that has an exterior change. Instead of mounting the old style command pod, the ship mounted the command pod from the L-9 frigate, making the class easier to identify on visual scan but a more potent adversary. This model mounts the new KIE-2 impulse drive system, giving it more maneuvering power than most ships in either the Romulan Navy or Star Fleet. The disruptors were all refitted to KD-1 3s, not only to give the vessels a longer range of fire in all directions but also to ease the maintenance chore. The photon torpedo bay was converted to fire the new KP-6, which causes as much damage as any of those employed by Star Fleet and twice the damage as any used by the Romulans. With this array of weapons, and with its strengthened superstructure, the D-10H is, by far, the most powerful of the class and also stronger than most others in space.