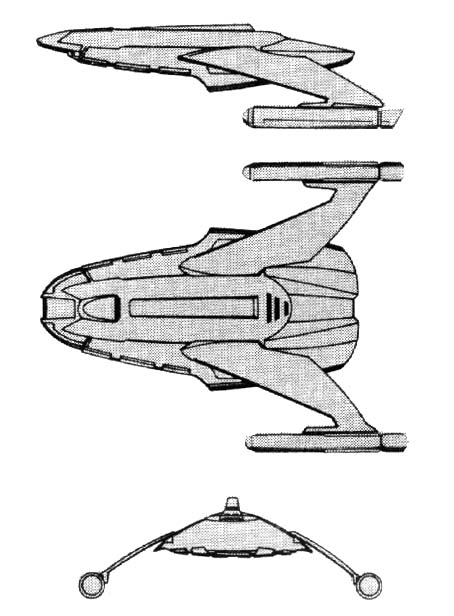 NOTES:
The V-2 Class, first encountered by Project Grey Ghost, was believed to have been built for research missions, much like the Federation research cruisers are. Reportedly, spacious laboratory facilities and shuttlebays for cargo storage made this ship an oddity in the Romulan navy. Several combat encounters with the Klingons and forces to the coreward have proved the vessel to be under-gunned and unsuitable for combat.

Several attempts were made to up-gun the ship, with the last being the introduction of the Type 5, launched in 2257. This version is reported to have carried a small plasma weapon and improved impulse drive system. Even so, the V-2 did not prove popular, and was eventually replaced by the V-5 and V-6 cruisers.

Of the approximately 70 Hunters built, about half are reported to be in reserve fleets and about 20 are reportedly working as research vessels for private firms. This vessel has rarly been scanned at close range, and plans given are speculative. The ship is named from the Romulan hathos (hunter), likely in reference to its mission in the Exploration Division.