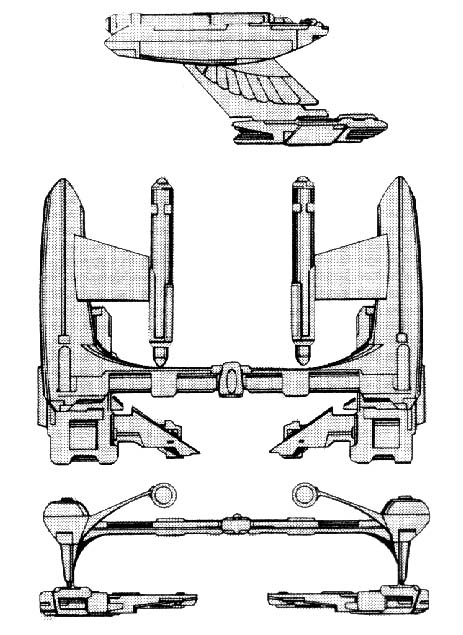 NOTES:
One of the oldest transport ships in known space, the J-3 Class tug was designed to tow cargo arranged in pods attached one to the other in a chain behind the ship.

About Stardate 1/90, the Type 2 was introduced into service; although it does not have the cargo towing capabilities of later models, it is still in production, because of its reliability and the need for a vessel to move cargos in its specific tonnage range. By Stardate 1/98, the class had undergone several unsuccessful modifications attempting to allow the design to use the RWD-1 warp engine to its fullest capacity; the Type 9 altered the hull configuration, relieving the problem. The Type 9 also had slightly more maneuvering power, greater superstructure strength, and the ability to tow twice as much cargo. The Type 14, capable of pulling 25% more cargo than the Type 9 at higher warp speeds, mounts more efficient shields and engines.

Current production estimates show about 15 of these vessels being produced a year. Of the approximately 700 vessels built, about 500 remain in service with the navy. Something over 100 have been sold to the civil sector. The class is named from the RomuIan ustalam stelas (lifter of stars), in reference to its towing capabilities.