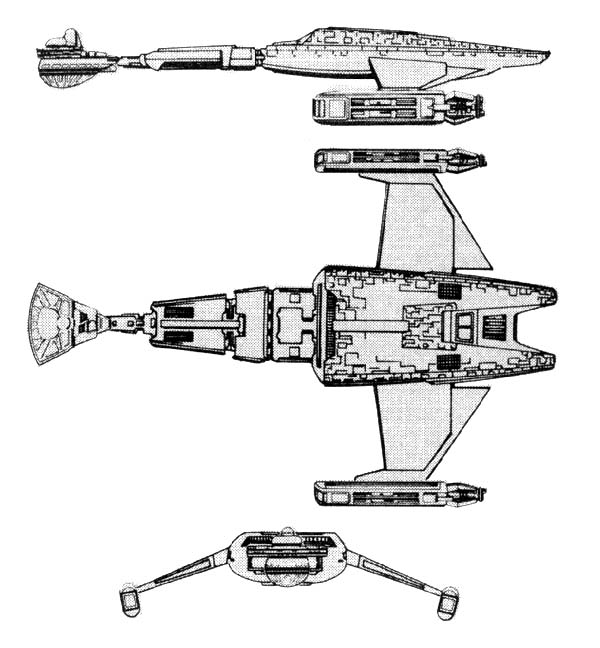 NOTES:
The D-20 was commissioned on Stardate 1/9606 and immediately rushed into the Four Years War, where they were used much like the famed D-7. Though the class suffered from lack of maneuver power and a relatively weak superstructure, it seemed to make up-for these deficiencies in its weapons, and shielding. Mounting the KWC-1 engines, the D-20A was able to attain higher warp speeds than the D-7, but was less maneuverable. Eighty-six have been converted to the D-20C.

This fault was corrected with the introduction of the D- 20C on Stardate 2/1202. This model is far more maneuverable and has more power, as well as a more efficient shielding system and stronger superstructure. Because of its extra power, KD-6 disruptors were added, increasing firepower by 50%. This model is still in production even though the D-20D has entered service on Stardate 2/1701, mounting KD-8 disruptors, which deliver 16% more destructive power over a greater distance.

Of the 634 D-20s built, 224 Cs and 80 Ds remain in active service; 292 As, 19 Cs, and 1 D have been destroyed; 2 As, 4 Cs, and 1 D are listed as missing; 1 C and 1 D have been scrapped; and 2 As, 28 Cs, and 4 Ds are in the service of ranking and prominent families of the Empire. The class is being produced at Gnuu Re’ and at H’rez. These facilities were originally set up to refit A models to C models, but when orders were issued for the production of the D model, Imperial Command re-designated both bases as production facilities. They began producing new ships as soon as the last of the older models had been refit. Both facilities combined produce a total of 13 ships per year.

The class is named from “the death of honor”, a traditional death rite involving a silver dagger. In this rite, a captive who has fought well is killed with a silver dagger handed down through the family lines. When a family line is broken, the dagger is destroyed after it has been used to eliminate the last family member.