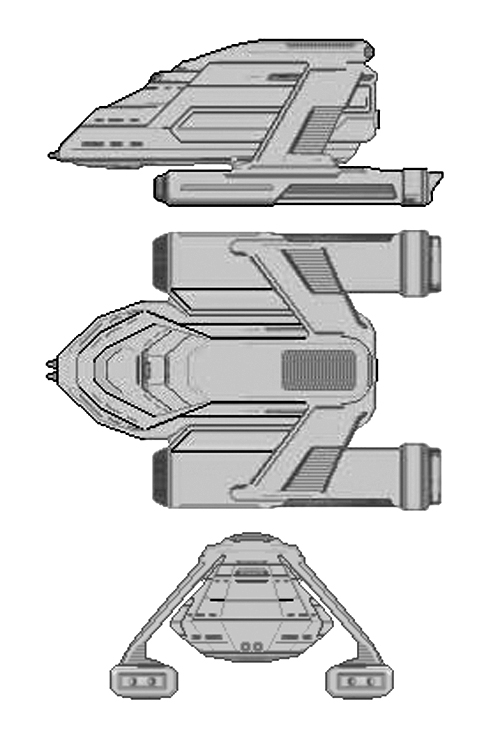 NOTES:
The G’glie, know to Star Fleet as the Tortoise Class, is a heavy utility tug currently in production by the Gorn Alliance with the primary role of Fleet Support ship. In this capacity it is designed to serve the fleet in various ways. As a transport it will serve the logistical needs of the fleet, hauling cargo to forward areas needing resupply. But it is the modules designed for the transport that make the ship unique and truly valuable to the Gorn. The Repair Module is a towed drydock which, while relatively inexpensive to build, has no engines of its own. The Assault Module can house armed shuttles and troops and has phaser batteries to support ground combat operations, but again, this module has no engines. In order to be of use, the modules must be towed to the areas where they are required.

At that point, the decision can be made on whether to separate the module and depart (freeing up the transport for other missions), or whether to remained docked. While in the docked configuration, all power to the module is supplied by the transport. Once separated, the Module relies on matter-anti-matter power generators and essentially operates as a station, lacking movement capability.

In it’s docked Repair or Assault configurations, the Tortoise has plenty of spare power and a good, if modest, weapons arrangement. In this respect it meets a need sorely lacking to the Alliance in the past. Where fleet warships had to limp home for repairs in the past, or be utilized as in-system monitors, they can now call upon the Tortoise. In some cases, the Tortoise has even been known to separate it’s module and act as a warship in it’s own right (although it is not particularly maneuverable). The Tortoise, which began construction in 2280, is currently being produced at a rate of 4 per year. In light of favorable reports production will likely increase. It is not currently known to Starfleet which clans are producing which modules, however, it is known that all of the clans have a stake of some sort in the production of Tortoise components.